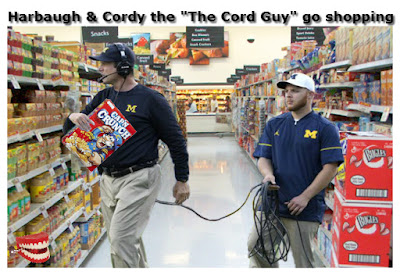 [yes, this is a true story. I've only changed most of the fact thingys like real journalists do]

Chattering Teeth News - Jim Harbaugh is the only Division I college football coach who does not use a wireless headset setup on the sidelines. Why? Because he can. You might as well ask why a bride doesn't wear a shorter dress and thereby negating the need for a bridesmaid to run around rearranging her dragging train and veil during the ceremony. But as long as there are people for that, well...

And that's where Cordy the ‘Cord guy’ comes in. Kori Reblin (a/k/a Cordy) is the assistant equipment manager who's chief responsibility is to tend to Harbaugh's headset cord, keeping it tethered to the coach - letting out just the right amount of line - but not allowing it to tangle. And to also help Harbaugh bustle the cord for easy dancing later at the reception.

Think of Cordy as a fly fisherman and Harbaugh the fly.

“It is a really serious job,” said Cordy. "One time I got distracted watching the game and let out too much line. Later, someone asked where coach was, I panicked, and hooked up the cord to a battery-operated hydraulic winch and towed coach Harbaugh back to the huddle. His khakis were all covered in mustard and to this day don't know where he wandered off to," said Cordy.

Harbaugh is an intense competitor and expects the same commitment from his players, coaches and equipment managers. One of his favorite stories from this past spring was regarding the quarterback competition between John O’Korn and Wilton Speight. It seems that both quarterbacks were arranging secretive after-hour throwing sessions with the receivers, tight ends and running backs trying to get the edge over the other.

Cordy says that is exactly how he got a leg up on the competition for the assistant equipment manager position.

"I would surreptitiously follow Coach Harbaugh 24/7," stated Cordy. "When the time was right, I would jump out of the bushes - or jump in his back seat at a stop light - and I would fasten his headset then start trailing him with the cord."

After 3 failed restraining orders and a stint in jail, Harbaugh finally relented and hired Cordy.

"It's a good thing too, cuz I think the other inmates in the REAL big house misunderstood my special skills of holding cable and touching up helmets," Cordy stated.

Now the two are inseparable, as Harbaugh insists on being wired 'round-the-clock.

“I’ve really gotten to know his movements and when to expect him to move, and he’s gotten a lot more comfortable having me right next to him,” Cordy said. “Though not when he needs to 'lay some cable himself,' as he likes to say."

The original cord was about 40-yards long to accommodate some slack so Cordy could maintain a 3 or 4 foot distance from Harbaugh while he’s coaching. They added an extender after last year’s trip to the grocery store when Harbaugh outran the cord and broke the belt on which it is attached when he heard an announcement over the intercom for a 2-for-1 sale of Charmin two-ply.

If you want to send Harbaugh any message on his handling of the Iowa loss, just tweet Cordy. He's only 3 or 4 feet away.
https://twitter.com/korithecordguy