Get your "I Petitoned the King" Stickers here while they last! 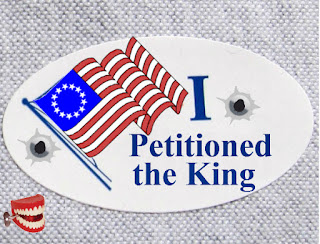 Interesting. Harry says the republican establishment "obstructed?" Obama has hardly had to raise the veto pen, but instead has used his extra-constitutional pen and his phone for lawless executive order after executive order. He has had his way with 'fundamentally transforming' our health care, our economy, the middle east *sigh*.

Indeed, Republicans are responsible for having created Trump, but not by "obstructing" Obama's lawless agenda, but rather by acquiescing to every un-American and unconstitutional act. I only WISH there had been some kind of push back from an opposition party. So now we get trump, and no sane person I know is happy about that.

And I keep hearing the tired argument that christian conservatives need to vote Trump (NOTE: Self-Linking Alert)  "Because Hillary. Because the Court".

Since 1969 (47 years), Republicans have nominated 12 out of the total 16 justices during this span. That's 75% Republican nominees, folks. How has the culture rot treated since then? Need I remind you it was The Burger court, with Berger, Blackmun and Powell all joining the majority in the court's 1973 decision, Roe v. Wade, establishing women's constitutional right to have murder their babies. Vote for Trump if you want, but stop this bogus argument.

Change, good or bad, will not come through these faithless courts or either of these 'deplorable' candidates. God Bless, and pray for America.
Posted by DaBlade at 8:09 AM