Chattering Teeth News - Michigan Coach Jim Harbaugh puts his undefeated record of 9-0 on the line today in Iowa (5-4) in a football version of a Hawkeye Cauci showdown. Michigan is currently ranked #2 in the country, and U of M fans are hungry for Harbaugh to finish this thing and to make the Wolverines great again by culminating into a national championship.

But just who is this Harbaugh character, and does he have what it takes to lead the greatest college football team on Earth? Personality wise he is brash, a little crazy and kind of an a$$hole. Even he admits his personality tends to wear out his own welcome. Jim Harbaugh Is The ‘Donald Trump Of College Football’

During the coach selection process, there were many who felt a more conservative coach was needed who was more in the mold of our founding father, Bo Schembechler. Bo, himself, was a disciple of legendary Ohio State coach Woody Hayes, and his "three yards and a cloud of dust" conservative philosophy.

Oh sure, being overzealous, petty and arrogant are fine qualities for a president of the United States. But do we really need a tape surfacing later during a run for the national championship of Harbaugh telling some sideline reporter that he likes to "grab 'em by the buckeyes"?

Who was it that said: "When you pass, three things can happen and two of them are bad.?" Some might say the same thing about throwing out tweets repeatedly (though I'm hard pressed to think of what the one good thing could be) 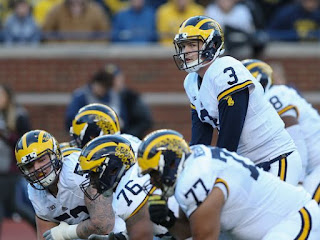 Harbaugh certainly has built a wall to stop the flow of opponents over the line of scrimmage, this I will tell you. There is no sanctuary for the opponent on our side of the ball, and field general Wilton Speight must be protected in the pocket at all cost.  Why is this so important, you ask? I'll tell you.

Harbaugh has also rebuilt his defensive arsenal, led by Heisman Trophy candidate Jabrill Peppers. Peppers has played 10 different positions on both sides of the ball, projecting our power both home and abroad.

So In Conclusion:
So far, things are looking good for my favorite team. However, I wonder if I should worry about the loyalties of this Harbaugh guy. He did play for Bo, and Bo did study under Woody at OSU... What if Harbaugh is really a Buckeye who lied and ran for coach as a Wolverine?... I mean, now that we dominate all 3 branches of football (offense, defense and special teams), what if Harbaugh purposefully gives it all away and starts throwing passes to the opponent and fumbling into their hands? What if we have been projecting onto Harbaugh, qualities we wish he has instead of his actual qualities???

Nah. Jim has been a loyal Wolverine all his life. It's not like he's 70 years old and spent the first 69 years of his life rooting for the Buckeyes. Who do you think he is? Trump?
Posted by DaBlade at 6:54 AM