Chattering Teeth News - Bob, a long-time employee of a southern Florida gas station is in shock today, as he arrived to work this morning without his friend Frank to greet him. 'Frank' is the name Bob had given to a petrified hot dog that had been tirelessly rolling away in the back row of the gas station's reliable Hot Dog Rolling Machine for as long as he can remember. 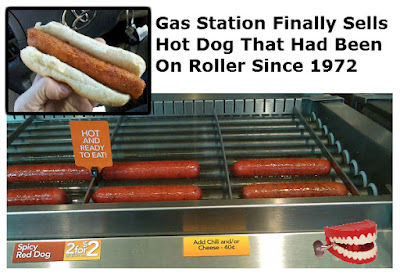 "I took this job back in 1972, and Frank had already been workin' there for a while at that point," said Bob, as he plugged in the coffee machine to re-heat yesterday's coffee for the expected morning rush. "If I was having a bad day, he was always there to listen to me."

Bob told this reporter that he didn't notice Frank at first, and would begin each morning shift with plugging in the coffee machine and turning on the frankfurter's heat lamp. When patrons continued refusing to purchase the discolored fella with the strange aroma, Bob just says he moved it to the back row and forgot about him. That is, until some time in the late 80's when Frank started talking to him during the slow hours. 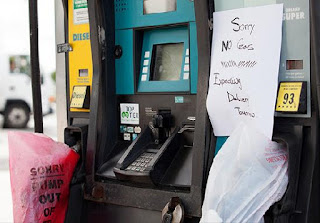 After that, they became fast friends.

Until yesterday, when Bob reported to work and learned that Sally from 2nd shift had sold Frank to a hungry customer. Apparently, this customer had come looking for gas for his moped in order to flee the approaching hurricane, but to no avail. Not only did the station run out of gas, but previous panicked customers had already cleared the shelves of all the shrink-wrapped jerky, candy and bags of pork rinds.

And so Frank was an impulse purchased and Sally hasn't been seen since.

Prayers for the folks in this storm's path.
Posted by DaBlade at 8:03 AM