Chattering Teeth News - Joel Osteen's Lakewood Church reportedly appears to be making preparations to launch a hobby toy Estes Alpha III Rocket  in response to criticism he has received for turning away Hurricane Harvey victims in need of food and shelter. 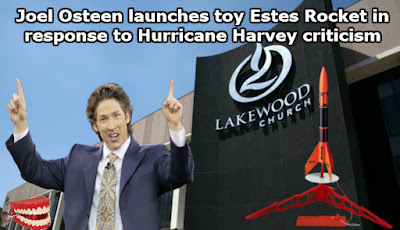 The rocket brags a projected maximum altitude of 1,100' with a 12" diameter parachute for rocket recovery. 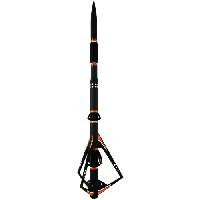 While this rocket series is easy to assemble and designed with beginners in mind, Joel Olsteen is sure to increase his knowledge and technical capabilities with each launch.

He could feasibly reach a skill level 5 rocket like this Black Star Voyager, with its laser cut wood, waterslide decals, and an 18 in. parachute recovery, and an ability to deliver a 7-ounce payload of "sympathy and benevolence" at Joel's whim.

Chattering Teeth Science News - NASA believes the Yellowstone super volcano is a greater threat to life on Earth than any asteroid  (and second only to Trump's presidency).

NASA’s researchers were tasked with coming up with strategies to avert a super volcano catastrophe. At the top of this list of 'fixes' was implementing suffocating new taxes coupled with an Al Gore and/or Michael Moore propaganda movie aimed at anesthetizing the American people into unconsciousness. While the taxes would have no effect on the volcano, it would line the marxist's pockets to ensure survival of our 'best and brightest'.

The second strategy, while more practical, was substantially more dangerous and having to do with drilling 10km deep holes adjacent to the magma chamber and pumping in cooling water. “Don't Mess With Yellowstone Super volcano” Geologists Warn NASA! The “risky” plan could actually backfire and trigger an eruption – potentially triggering a deadly nuclear winter.

As a compromise, NASA Imagineers have developed a plan to relieve Yellowstone's super volcano pressure with Melania Trump’s black snakeskin 5-inch stilettos. Volcanologists agree that, while the 5-inch stilettos would not drill down as deeply, the sheer volume of puncture holes could theoretically decrease temperatures by 35%. 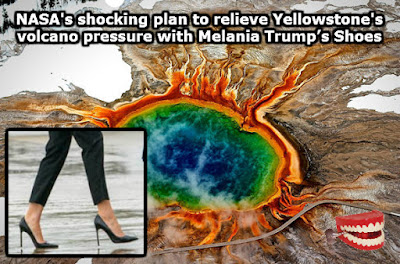 However, if Melania's stilettos inadvertently triggered a devastating super volcanic eruption, it could lead to potentially deadly consequences, including breaking and melting the 5-inch stilettos heels.