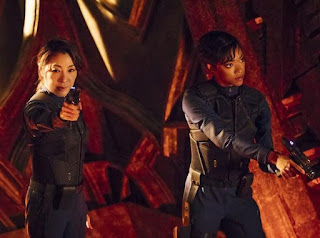 I'm guessing that Star Trek "trekkies" would not consider me a "trekkie". I've never dressed up in Spock ears, mail-ordered an "away team" uniform or did the whole "na noo na noo" hand puppet greeting.

That said, I've watched all of the original Star Trek series featuring Captain Kirk many, many times. I've watched all (or most) of the Next Generation with Captain Jean-Luc Picard. I've watched the motion pictures except for the last reboot one, but I'll get around to it. That's it. I haven't watched any of the other series spin-offs, like the one with that female captain Janeballs or whatever.

Call me a sexist male chauvinist, but if I'm hurtling through space at warp speed in Klingon territory - with tribbles spilling out of the overhead cabinets - and my survival depends on my captain defeating a reptilian Gorn in hand-to-hand combat, I'll take Kirk. Followed closely by Picard. As for Janeballs, she can top off my tea. Earl Grey. Hot.

So it should come as no surprise that I have no intention of watching this new TV series spin-off, Star Trek: Discovery starring "Cagney and Lacey". Give me TJ Hooker any day. And this decision not to watch was BEFORE I read that this series was to feature an openly gay couple.

Wow, how 'ground-breaking' and 'progressive' of them. It's not like every other show doesn't try to shove this crap down our throats.

I'm sorry, but in my distant future stardate 2258,  Geordi La Forge's blindness is cured with a sweet wrap-around visor, and 'Bones' will have a vaccine to cure these gender disphoria gay genes. Just skip and sashay your way down to sick bay for a quick tricorder reading and a DNA dialysis, and voila'! No more disorder! It's going to happen.

In the meantime, I'll pass on this latest attempt to further the culture rot and accelerate societal decay.

Hey Captain Janeballs, be a doll and give me a little shoulder massage while I watch a re-run of Last Man Standing. Thanks, babe.