In the most bizarre anthem protest yet - in a show of unity of hatred for this country, our armed forces, first responders, police and firefighters - the Cowboys and Cardinals took a knee during the anthem. 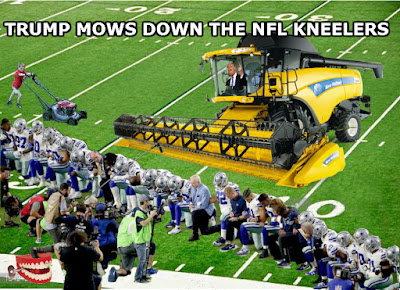 'Twas Monday Night football, and all on the field
Not a player was standing, all of them kneeled;
Their stockings were taped by their knees with care,
For during the anthem they would all soon would be there;

The fans were standing with their hands on their hearts;
with visions of patriotism that heroes imparts;

When out on the fifty there arose such a clatter,
I sprang from my couch to see what was the matter.
Away to the flat screen I flew like a flash,
Turned up the volume and threw down the sash.

When what to my wondering eyes did appear,
But Trump at the wheel of a combine harvester
and there was 11-year-old sixth-grader named Frank from Virginia
herding the stragglers with his 2-cycle John Deere.

"On Reaping, on Threshing, on Winnowing," he yelled;
As the NFL players got bailed and felled

Shame on you, Jerry Jones. The league denied you and your "Cowboys" the small helmet sticker to honor the 5 fallen Dallas officers murdered by a BLM surrogate last year. And now you take a knee in unison with the BLM and America-haters?

I'll have the baliff call you when I'm ready to render my decision... OK, I'm ready.

I, the honorable DaBlade, BlogMaster extraordinaire of the Chattering Teeth blog and  by the powers granted to me, by me as kind of my own domain, do hereby cancel the remainder of the NFL season.  Not in my house.
Posted by DaBlade at 8:07 AM