Another bombshell text message has been discovered by Chattering Teeth News between former members of Robert Mueller's team. This is a game changer folks! 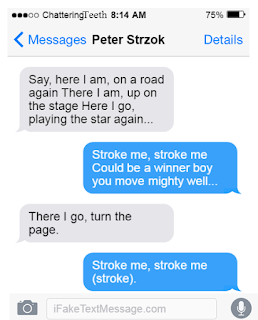 On a totally unrelated subject, I still have the vinyl albums of Mr. Billy Squier and Bob Seger (and neither were harmed in the making up of this blog post)

Full disclosure... I remember also having a black and white poster of Billy Squier on my teenage bedroom wall some 40+ years ago. Does that fact make me a monster?

In conclusion, the Chattering Teeth Blog just surpassed the 10 year blogiversary of its existence, and I take special pride in the fact that dozens of people (and thousands of Russian bots) have stumbled here over the last decade only to squint in confusion at my many scrawlings. Many thanks (and apologies).