NBC's Lester Holt returns from NK  in a vegetative state, ala Otto Warmbier, with severe brain damage, an unresponsive wakefulness and a lack of high end cognitive function.

His colleagues are now commenting on this marked improvement and reporting abilities. 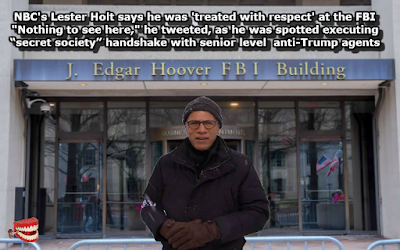 Chattering Teeth News - NBC's Lester Holt says he was 'treated with respect' at the FBI. "Nothing to see here," he tweeted, as he was spotted executing the “secret society” handshake with senior level anti-Trump corrupt agents.

"I did not see any cronyism and corruption at the senior levels of the FBI," stated Holt between bites of his ham sandwich, and who was given free reign and full access to the FBI's lunch room commissary.