Fellowship of the Drunks

ANNOUNCER-GUY: LIVE! From the Chattering Teeth Studios, it's your favorite blog feature game show where I first quote from a linked story, then I comment on the contents of said quote with a pithy, sarcastic or otherwise unoriginal response that will quite literally change the world! Immediately. Seriously. Literally, as in symbolically in my own mind. So COME ON DOWN! you're the next reader on DaBlade is Right!

Today's featured story takes us to the other side of the globe... where Hobbits actually once roamed.

"A group of friends came up with a creative plan to avoid a New Year's Eve alcohol ban, by building a makeshift island in coastal waters." 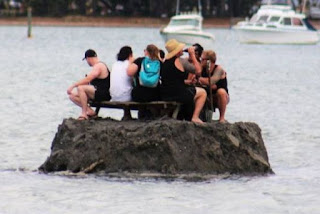 First off - An alcohol ban on New Year's Eve? Have we landed in North Korea? Or worse yet, Mordor? Well good on them for finding a creative solution. Load up the barrels, boys! We're off to New Rivendell, where the mead flows freely!

"...they built the island out of sand during a low tide on Sunday, and it was just big enough to fit a picnic table and an Esky."

The sandbar island was not, apparently, large enough to include a porta-Loo. And there are no Ents on the island, though they might object if they were. You may try to hold it until your Sting glows blue, but at some point you will need to release the orcs into the pool.

"Because the friends were in "international waters", they technically were excluded from the alcohol ban."

and so begins Fellowship of the Drunks. 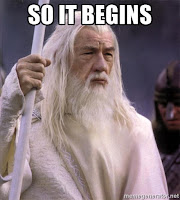 [CUT SCENE]
Frodo Baggins: I wish the alcohol ban had never come to me. I wish none of this had happened.
Gandalf: So do all who live to see such times. But that is not for them to decide. All we have to decide is what to do with the time that is given to us.
Police Commander Sauron: You can not hide, I see you! There is no life, after me. Only!.. Death!

"The friends stayed on the island throughout the night, drinking alcohol and watching the fireworks."

That was good. Let's get another one. 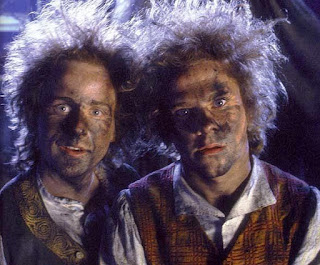 "The island was still standing on New Year's Day... It was great to see some Kiwis having a bit of fun."