Tonight is President Donald J Trump's first State of the Union Speech and I'll be watching. Trump had a very good first year, despite constant attempts to bring him down with the false 'Russian Collusion' narrative perpetrated by the democrats, Big media, and the highest levels of the FBI and 'Intelligence'.

I don't know about you, but I am also looking forward to Mad Auntie Maxine Waters' unofficial response to the SOTU on Black Entertainment Television (BET). Here is how I see the headlines Wednesday morning:

It could happen, just take a look at their schedule. 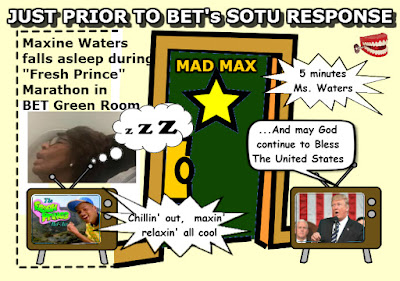 PICTURED: I predict Mad Maxine will be given the star treatment at the BET studios. She will arrive early because of the promise of free donuts in the Green Room (and because 'what else does she have to do?) She will subsequently fall fast asleep behind the locked door of her dressing room, while a Fresh Prince of Bel-Air marathon plays on the monitor.

Instead of brushing up on her prepared and hate-filled racist pavlovian response to Trump's speech, she will instead dream of the wealthy Banks family and shenanigans of their nephew Will, fresh from the ghettos of west Philadelphia.

When she is quickly roused from her slumber and propped up in front of the mic by BET stage hands - her James Brown wig permanently askew to one side, and dried drool on her cheek - she is given a hit of smelling salts and a slap, just as the ON AIR light goes on.

And the rest, as they say, will be history. She will recite the entire Ill Will episode from season 2, but mangling it a bit. Instead of will not wanting to go to the doctor for a tonsillectomy because he is afraid of hospitals, it's because Trump killed the obamacare mandate. She will state that Trump is a racist with no good values who wants to make the Fresh Prince 'white again', or something... 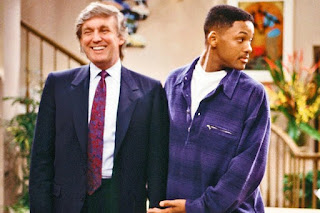 IN CONCLUSION - and full disclosure, my predictions do not always come to pass, proving to me beyond a doubt that this blog is monitored at the highest levels and that adjustments are made on the fly. If Mad Maxine is just her regular incoherent, ignorant and racist self - you'll know they've been here and have gotten to her.

In any case, I will be doing the Carlton dance during Trump's speech.