By the looks of him, it appears Steve has already received and complied with a "cyst and deceased" order to his haggard and corpselike face.

As you may know, I was not on the Trump train as early as most. A lot of that was due to his affiliation with this a$$ clown (among others). The president has been a pleasant surprise to me in his first year on the job. Meanwhile, Bannon has not been a surprise at all. What ever the inflammatory accusations he is making, it's just nothing more than noise to me. This egomaniac has zero credibility.

“They’re going to crack Don Junior like an egg on national TV,” the disheveled Bannon slurred. 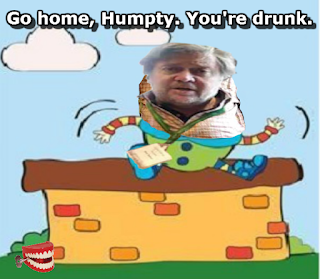 Depending on the availability of the hotels wifi, I may be off the internets for a week or so. Feel free to feel the fake news gap by reading Bannon's book.
Posted by DaBlade at 5:43 AM