Ed McMahon, best known as the sidekick to Johnny Carson, has fallen on hard times and faces foreclosure on his multi-million dollar Beverly Hills mansion. McMahon had this to say in another probing Larry King interview: "It's a combination, it's like a perfect storm... If you spend more money than you make, you know what happens."

Sure I do. You negotiate with the Obama campaign for a back room deal involving him paying off a portion of your failed campaign's debt, right Hillary?

McMahon can't get his asking price for this mansion. He is neighbors with Britney Spears, and it is unclear how proximity of the Spears "mansion" has influenced his property values.

And so Ed may lose his house to the bank. Damn that Mr. Drysdale! We can't let this happen to mister ""Heeeeeeeeeeeeeeere's Johnny!" Let's do a bottle drive. I'll get the beer cans at the Spears residence - that should be good for the arrearage (Ewwww! I just said "Britney Spears", "good" and "arrearage" in the same sentence. I'm sorry).

Hold on Edward laddy, help is on the way. You may already be a winner! That's what you used to tell all of us when you were a pitchman for Publisher's Clearing House. I used to daydream about that Prize Patrol van pulling into my driveway and you on my porch holding one of those big-(blog edit)-ed cardboard checks with my name on it! 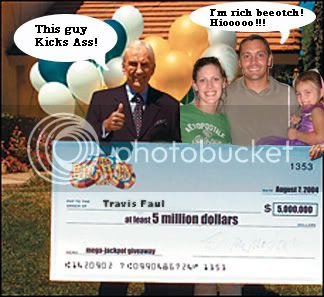 Come to think of it, I never did get one of those checks. Sorry Ed, you're on your own. My cardboard check would bounce. But could I interest you in a magazine subscription?
Posted by DaBlade at 7:06 AM