I am in the market for a new golf bag and Ping will not be in the running. Apparently, the folks at Ping are too busy trying to sell to new customers than in exerting minimal effort to keep the ones they already had. Fair warning to you, dear readers. After my experience with them, I cannot at this time endorse Ping. Who knows - that could change. Maybe I will get a satisfactory response from the folks at Ping after I submit this post to the "Stories" section of Ping's homepage ( http://www.pinggolf.com/ ) If I do, all of you here in my humble little corner of cyber golf land will be the first to know. But I won't hold my breath. My story? O.k. 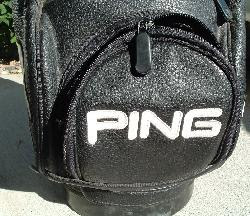 I received a Ping cart bag for a birthday gift from my mother a few years ago. It seemed to be the perfect receptacle to carry my Ping Eye's, with the 6-way soft cover top and pockets galore - I'm sure it was a $300 or more bag brand new. The problem is, the most important zipper on this bag (that being the one on the bottom pocket that houses my ample supply of golf balls) no longer works. And it's not like the zippered bag has a real difficult job. All I would expect my golf bag to do for my 20 to 25 rounds per year is for this bottom zipper to successfully open and close, allowing me access to the contents of the pocket after I lose a ball from an errant shot. That's it! (admittedly I lose a lot of balls. If this were a car, I'd be putting "city miles" on it). But some time ago, the zipper broke. It's not that it pulled away from the bag. The thick roped stitching is still holding, and is the kind that I imagine Rosie O'Donnell requiring for her inseam. (Yikes! No picture.) It's just that the zippered teeth stopped locking. Last season, I simply left the pull tab at half mast. This was semi-functional, but I would occasionally lose a ball or two out of the side openings. Plus, it irritated the hell out of me all last season!

This year I finally decided to have this zipper fixed. I had my clubs re-gripped at King Par in Flint Township and told the salesman about my bag. He told me that they would be happy to ship my bag back to Ping for repairs and that it probably wouldn't cost me a thing "since Ping stands behind their products". Not being one of those guys that is always looking for something for nothing, I explained to the salesman that free would be great, but that I would be willing to pay for a replacement zipper and the cost of repairs. I fully expected to pay, as the bag was a few years old (although the zipper had been broken for the last two years). He told me that if Ping had a required fee, he would call me for payment. He said it would take three weeks turn-around and I would get a call when it was in. I said fine. That was May 15.

Now I should tell you that this paragraph has absolutely nothing to do with Ping, but much to do with adding to my overall mood. I pulled my old generic golf bag out from the enclosed corner room of my basement that houses the sub-pump. I carried it up from the darkened bowels of this cave, exposing it to the sun for the first time in a few years (it reminded me of Cool Hand Luke coming out of solitary confinement). I quickly realized that this bag smelled awful (decaying corpse eu toilet). I figured that a few blasts of Lysol and an hour in the sun would resurrect this bag. "After all, it's only for three weeks," thought I. Well, the Lysol and sun have met their match, as the unpleasant odor of the crypt continues to follow my partner and I around the course each week. I'm sure the source of this smell (black mold?) is completely healthy too. "Don't worry partner. I'm getting my bag back soon." Hah!

(Back to the story) When I still hadn't heard from King Par by June 12th, I decided to give them a call. I identified myself and the reason for my call to the gal who answered. After checking, she returned to the phone and told me that my bag had arrived several days ago (Strike one! Would they have EVER called me?) and that it had been sent back unrepaired (STEEEE-RIKE TWO). WTF!? "Why?", asked I. "Because the broken zipper wasn't covered under the warranty," she answered.

I think she sensed that I was displeased, so she put me on hold so that she could pass me off to the salesman who I originally had dealt with when I dropped the bag off almost a full month ago. I attempted to bring him up to speed. I asked him why my bag was returned unrepaired. He asked what was wrong with it. I explained that the zipper was broken. "which zipper?," he asked. (Now I'm getting really pissed). "You have the bag right there in front of you so you tell me!... (sensing he might not be the wedge with the highest degree of loft in the bag, I spotted him the answer) ...it's the bottom pocket."

(phone conversation continues... no embellishment here, I swear!)
salesdude: "It looks O.K. to me"
Me: "Well, maybe the gal I spoke with is mistaken and it's been fixed. Humor me and try it. Let me know if it's still broken."
salesdude: "Yep it seems to work now. The tab goes back and forth. Of course, the teeth aren't staying closed."
Me: "I guess it depends on one's definition of broken, but by mine, the bag is still broken."
salesdude: "Yah, I see your point."
Me: "I'm tired of leaving a trail of golf balls behind me like bread crumbs left by Hansel and Gretel."

I then recanted the whole story back to him. I told him that when I dropped the bag off, I was given two possible scenarios - That Ping would fix the bag for free, or that Ping would fix the bag for a fee. I told him that this "door number three" was never presented to me as a possible option. Since I was willing to pay, why wasn't it fixed? Certainly they have the technology to fix a zipper. The salesman promised to call Ping and get an explanation and then to call me back. I asked him if he wanted me to make this call, since I was obviously a little more P.O.'d about this than he was, but he said he would. To his credit he called me back within 5 minutes, but what he told me Ping had said absolutely floored me. Ping stated that "they couldn't repair the zipper because of the curve of the tube." They suggested I take the bag to a shop that deals with luggage.

If NASA can send a probe to Mars and almost be able to analyze soil samples, then by God Ping should be able to fix a zipper on their own product, shouldn't they? They could build in an obscene profit margin for this service and at least give customers an option, couldn't they? I mean, if you bought a brand new car and then had a blowout after 5,000 miles, the dealership would sell and install a new tire for you, wouldn't they? I have never heard of a flat tire ever totaling a car. But apparently, the bag's "curve" has Ping's own engineers completely baffled, prompting them to suggest I take this to a much more competent and intellectually superior source than them.

That being "people who deal with luggage".
Posted by DaBlade at 9:54 AM