Sports:
Ahhh, the afterglow of the Wings victory. What a ride! Now all we have left is the Tigers *sigh*. Speaking of which, here is another beauty from MSgtEd 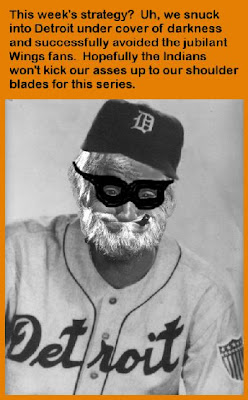 Politics
A headline I'd like to see:
Obama taps old racist white grandmother to be his running mate

I think that is more likely to happen than for him to take Hillary. I could be wrong. There is a first time for everything. He does need to figure out a way to split the "typical white person" vote with McCain (Or, as Michelle purportedly calls them, "whitey"). Maybe Yosemite Sam is available for the VP slot. Juan Williams believes all Obama needs to do to "convince dubious white voters" is to give another race speech, only this time make it sincere. Juan suggests that this speech include an admission that Obama is guilty of "using race for political expediency". He writes, "He has to call race-baiting what it is, whether it comes from a pulpit or calls itself progressive politics... to acknowledge that not every critic is a racist. His very liberal record and his limited experience, like his association with Rev. Wright, is a fact, not the work of white racists."

Hey Juan, don't you be throwing these things called "facts" in Obama's face. Obama will not throw himself under the bus. It's getting too crowded under there.

I'll leave you with some classy art/poetry: