From You're the man now dog...
Listen to your father Wendy

PAGE TWO:
According to Drudge, this guy is a NASA scientist, but he doesn't sound like a "rocket surgeon" to me - PUT OIL CHIEFS ON TRIAL FOR SPREADING DOUBT ABOUT GLOBAL WARMING..."

James Hansen, one of the world's leading climate scientists, will today call for the chief executives of large fossil fuel companies to be put on trial for high crimes against humanity and nature, accusing them of actively spreading doubt about global warming in the same way that tobacco companies blurred the links between smoking and cancer...

He wants to see a moratorium on new coal-fired power plants, coupled with the creation of a huge grid of low-loss electric power lines buried under ground and spread across America, in order to give wind and solar power a chance of competing.

Wow. I love that part. "in order to give wind and solar power a chance of competing." Current energy costs are evidently not high enough for this dweeb just yet. That's the dirty little secret with these Lib environMENTAL wackos. They love that Americans are driving fewer miles (by a few percentage points) and couldn't care less the amount of suffering it has caused. That is just a means to an end and hastens our evolution from an evil free market driven economy to that of a big government socialist economy.

NASA? Aren't they currently drilling in a prestine environment?! Where's the outrage? 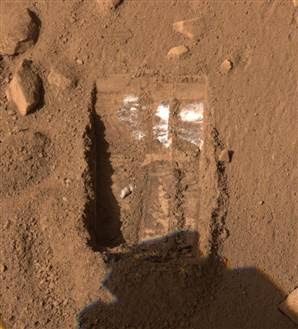 Meanwhile...
DaBlade can't come to the blog right now, as he is on vacation and burning carbon at a ridiculous clip. Please leave your fake name and comment, and he will blog back to you (or not) when he returns to this internets, after basking in the hot sun - that giant burning orb in the sky that doesn't have anything to do with the so-called global warmings. Beeeeeeeeeeeeeep!
Posted by DaBlade at 4:28 AM