Of Thongs and Headscarves

If you're like me, you always think safety first. That's I we wear my seat belt, I put fresh batteries in my smoke detectors, and I always (and I mean ALWAYS) wear protective eye goggles before prancing around in a new pair of thong underwear. A Los Angeles woman did not follow that last golden rule when, as she was trying on a thong from Victoria's Secret, "a decorative metallic piece flew off the garment and struck her in the eye." She is now suing the underwear giant (no, not Rosie O'donnell) for selling a defective thong. Great! Another "frilly-vous" lawsuit. We will all be paying more for this product, or risk showing those unsightly drawer lines through our polyester suit pants. (and I just recently discovered that I had been mistakenly wearing mine backwards). 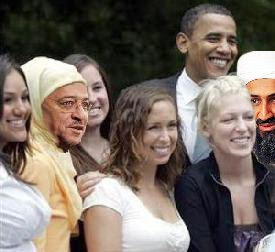 Did you hear about the two Muslim women who were given the heave-ho when they tried sitting behind the podium at Barack Obama’s rally in Detroit Monday? Apparently the headscarves were a distraction to Obama, as it was causing him to daydream about his childhood days in the madrassa. Actually, the real explanation is not much better. He didn't want to be seen with them because of the "political climate." But I thought he was the Messiah who was going to bring all Americans together? Something else is going on here. I just can't put my finger on it.

Liberal activists originally applauded these screaming headlines from the UK: Cancer patient recovers after injection of immune cells,that is until they discovered that the man was cured of skin cancer after being injected with billions of his own immune cells. Apparently, if immune cells don't originate from a pile of dead human babies fetuses it isn't worth celebrating. No word yet if British scientists have had luck using these immune cells for their backlog of necessary dental work.

Who am I?: He is the icon symbol of global warming. Want a hint? He has a pasty white complexion. He must weigh a ton! He is a "gore" machine. (no, not Al Gore)
Answer: The Polar Bear

One of these majestic creatures of the prestine arctic was shot and killed yesterday by Icelandic police, but we all know it was ultimately George Bush's fault. He caused this poor creatures death by not signing the Kyoto treaty. The treaty would have cooled the earth. This polar bear wouldn't have been overcome by heat stroke and wandered off to Iceland, hundreds of miles from it's natural habitat. I see you liberals nodding in agreement. That was called sarcasm. It's not that I don't like polar bears or think of them as majestic creatures (I do). It's just that, if my car ran on polar bear blood and it sold for $2 per gallon, I'd say "fill 'R up!".
Posted by DaBlade at 6:33 AM