From pigeons to politics 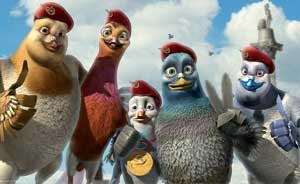 * Iran busts 'spy pigeons' near nuclear site: "One of the pigeons was caught near a rose water production plant in the city of Kashan in Isfahan province, the report cited an unnamed informed source as saying, adding that some metal rings and invisible strings were attached to the bird."

However, what really gave the pigeons away was the little Yamakas they were wearing on their feathered heads. Mahmoud Ahmadeenadude has finally met his intellectual equals in these pigeons. So far, the birds haven't cracked under his questioning, cooing that the "metal rings and invisible strings" were simply pigeon goth body art. "Hey, we are only here for the 1,500-meter-long ostrich meat sandwich," claimed one of the hooded captives.

* North Korea is set to make an "important announcement" today. What could it be?

My prediction: Kim Jong-Il has either died or is incapacitated. However, either his corpse or his comatose body will be propped up and continue to lead the country and to endorse Obama.

* NEWS FLASH: Colin Powell endorses Obama and IS NOT a conservative! *yawn* He was a great general and let's leave it at that. He is just lashing back because he felt ill-used in the WMD presentation at the UN.

* NASA to launch probe to study edge of solar system:
"...a space probe that will go into orbit high above earth to study the distant edge of the solar system." "The Interstellar Boundary Explorer (IBEX) is on a two-year mission" to study this vast area of "turbulent gas and twisting magnetic fields". (Sounds like that tricky area between the first and second bowl of chili.) The article goes on to say, "The interstellar boundary regions are critical because they shield us from the vast majority of dangerous galactic cosmic rays". Now we can get the FACTS on the REAL damage SUVs have been causing to this outer boundary!

The environmentalists of tomorrow: "boundary huggers"

* You may have read about Russian Prime Minister Vladimir Putin having his dog outfitted with a collar that will allow him to track her movements by satellite. (That's "movements" as in "whereabouts"... sheesh!) Putin has now ordered tiny Vodka bottle collars for his personal inventory of spirits. Get it? A Russian... and his vodka? errr, nevermind. They all can't be gems. Hey! Maybe those pigeons in Iran are wearing Putin's collars and are really Russian double agents.
Posted by DaBlade at 7:06 AM