According to The Onion, a 900-pound giant squid joins Whoopi Goldberg, Joy Behar, Elisabeth Hasselbeck, and Sherri Shepherd as a cast member on 'The View'. As I excitedly read this article, I was thinking to myself, "Wow. That might actually make that show worth watching". 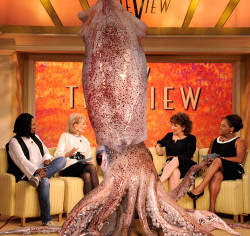 But then I came to the following paragraph and I began to suspect that this might just be a spoof...

Some viewers... have complained that the squid is too conservative. During an interview last week with Republican presidential candidate John McCain, the squid sat silently sprawled across the center of the studio and didn't ask the senator a single hard-hitting question.

"That squid is there for one reason, and that's to push its right-wing conservative agenda," Denver, CO viewer Mary Foley said. "Come on, give us viewers a little credit here."

Hey, call me a skeptic, but those pinkos over there would never allow another conservative on the panel sitting next to their token whipping post, Hasselbeck. Not even one as quiet and reserved as the squid here.

Maybe the giant squid feels he can do more good working within the system and join the presidential race already in progress!

As I watch the debate tonight, I will imagine the giant squid standing behind it's own podium as a viable third party candidate, taking questions and waving a tentacled 30-foot arm for emphasis.

Then it inks Obama.
Posted by DaBlade at 7:20 AM