IS BRETT FAVRE TRYING TO SWAY THE PRESIDENTIAL ELECTION?

If so, let's hope he has more luck with that then he did with the Lions... 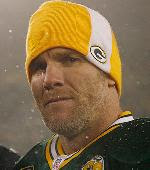 Brett Favre angrily denies the FOX Sports piece that made the accusation that he "shared information" with the Detroit Lions prior to their 48-25 drubbing on Sept. 14 at the hands of the Green Bay Packers. Brett did admit to having a phone conversation with then-Lions president Matt Millen, stating:

"Matt and I are friends," Favre said. "He was inviting me to come to his place to hunt. He lives about an hour from here. But I'm sure his intentions were to fish me for fair information, just ask me how we attacked them last year. We attacked them pretty good. Didn't give him any game plan. I haven't been in that offense in over a year."

Favre also stated that it was Cowboys quarterback Tony Romo who called him asking for advice on playing through injuries.

"Let me clarify this: I did not call the Lions, nor did I call Tony Romo," said Favre, who once played half a season with a broken thumb. "I don't know what else to tell everyone. I'm not calling people."

"I'm not calling people?" That's not what I'm hearing.

FAVRE: Dick called me. He heard that I was a hunter and was simply inviting me to go skeet shooting with him. I told him, 'no thank you, I don't have a death wish.' Sure, he asked me what I thought about Joe The Plumber, and I told him that he should be the Lions starting quarterback for the rest of the season. They need to see what the guy can do. This is the Lions, after all. They really have nothing to lose.

My source then reportedly administered smelling salts to Mr. Favre in an attempt to sharpen his focus, and asked him again if it were true that he gave political "strategery" to Cheney on how McCain should best run his two-minute warning drill.

FAVRE: That's just a bunch of rhetorical flourish. We didn't talk politics, but he asked me about my experiences in close games where the referees were "in the bag" for my opponent. I told him it's tough when the refs blow the whistle against you on phantom calls, but purposefully ignore the opponent's constant infractions. I stated that you just have to stick to the game plan when the fix was in and hope that superior talent wins the day.

and if McCain loses?

FAVRE: The Lions should tap him for outside linebacker.
Posted by DaBlade at 10:24 AM