Researchers at the RIKEN Brain Science Institute in Japan say that the male bird brains get high on dopamine when chirping smack to the gal chicks. Not to be outdone, a Johns Hopkins University study claims that the male starlings’ "mating songs are more than just empty amorous enticement," rather, a proclamation of productive fitness.

I have no idea why you should care. I just find comfort in the knowledge that scientists across this globe are devoting untold resources studying birds, so you should too. These secrets must be unlocked!

Of course, the big "science" news all over cyberspace are the dire predictions of mass global critter extinctions. According to the International Union for the Conservation of Nature (IUCN), 25% of land mammals are endangered.

Life on Earth is disappearing fast with man inflicting most of the damage…. On land more species face oblivion because of loss of habitat, hunting and climate change while in the oceans pollution and the side effects of fishing are taking a huge toll.

Who knew that fishing kills fish? 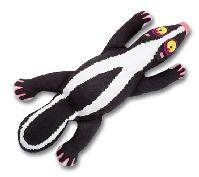 I checked the "animal punk'd" list, and unfortunately, skunks are doing just fine. I don't know about the rest of the planet, but around here, man has not inflicted nearly enough damage to the skunk's environment. When I see skunk squash on the road it evokes no sympathy, just a desire to avoid getting the toxic little road pancake's smell on my tires. I know that's callous, but they stink! What kind of cruel evolutionary defense mechanism joke is that anyway?

Evolution: Hey! I got it! When cornered, I'll have this furry little squirrel-like creature expel a cloud of noxious spray of no inherent value, other than to fully offend any innocent bystanders. And after I'm finished creating a "liberal", I'll move on to that striped mammal over there.
Posted by DaBlade at 7:11 AM