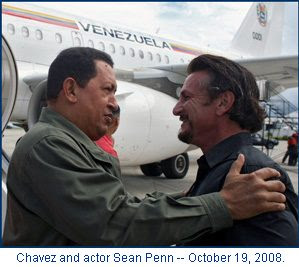 Dictator-groupie "Sean Penn is back in Venezuela visiting his favorite American-hating Marxist, Hugo Chavez". The two hit it off back in 2007 when Penn was playacting as a freelance journalist. It appears to me that Penn is looking at Hugo as a father figure. Isn't that all that liberals want in their leader? Someone to be their father. It must explain a good portion of Obama's support. "He will take care of us! He will provide for us! He will make nice with those misunderstood islamofacists, and we will be respected in the world again!"

Good luck with that. 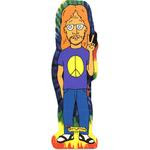 In other news:
CODEPINK women have been stalking Karl Rove. Could it be that these liberal woman follow Rove around because they are subconsciously infatuated with him? They are in San Francisco after all, and the usual crowd they hang with doesn't include any real men like Rove.

Protester in SF attempts to handcuff Karl Rove:
Karl Rove appeared at the Mortgage Bankers Association's annual convention in San Francisco yesterday, when a 58-year-old CODEPINK wack job stumbled on the stage. she mumbled incoherently as she approached, then tried to handcuff Rove in what she called a citizen's arrest for "treason."

"The Architect" never acknowledged the approaching wack job, and when she put her hands on him in a really lame attempt to handcuff him, he doubled her over with a sharp elbow to her solar plexus. From the seated position, Rove then delivered a forearm shiver, sending the CODEPINKO reeling. In a blink of an eye, Rove launched at her as she windmilled toward the edge of the stage, and finished her off with a sweeping high-kick, launching her into the crowd...

*snap* Sorry. Guess I was daydreaming again. Actually, she was simply escorted off the stage, and for the record, I'm happy that Rove showed restraint. However, I couldn't help thinking, "C'mon! At least 'taze her, bro!'. The jolt of electricity might shock her back to reality."

"In total, five Code Pink members were removed from the hall during Rove's appearance. The organization says none of the five women were charged."

Not even with "idiocy"? Oh well, I guess some things are readily apparent. We can all agree that these women are not following this panel of scientists advice on five simple things a day to stay sane.

CODEPINK's official release is slightly different than my version, but you can judge for yourself by watching the video here.
Posted by DaBlade at 7:25 AM