The Democrat Platform Bible update:
Good news! God is back in! Jerusalem is back in! Sure, it took 3 votes before the DNC finally just ignored the will of the delegates, who clearly voted more loudly in opposition. The DNC is just following their leader's example, who has governed against the will of the American people for almost four painful years.

Three times a secular charm!
I absolutely LOVED watching the video of this vote. Thankfully, Fox News pretty much put this vote on a loop. I couldn't get enough, and my face hurt from laughing so hard at the look on the LA Mayor's face when the verbal vote wasn't going by the script.

First Vote LA MAYOR: If you love God and give Him thanks and want Him back in the DNC platform, say "AYE"!
Delegates: “aye”
LA MAYOR: opposed?
Delegates:


Second Vote LA MAYOR: OK, let's try this again. While the chair recognizes that socialist atheists are the base of this party, comrade Obama doesn't want to scare away the gullible Christians currently on his side. He says if he can go to church once a year for the photo op, then you all can hold your nose and say "AYE"!
Delegates: “aye”
LA MAYOR: God-hating, baby-killing fornicators opposed say "nay"?
Delegates:


It did get a little scary when after the third failed attempt, when the Mayor simply declared, in the “opinion of the chair,” that it had been passed. The reaction reminded me of the scene from the Excorcist when the priest sprinkles Holy water on the demonically possessed girl. The crowd vaulted to their feet screaming, waving their arms... I believe I saw a few hundred 360 head spins and projectile pea soup showers.

The base finally settled down when later in the program they were treated to feasting on Red meat and the corruption of innocent souls with speeches by Sandra Fluke and Bill Clinton. Remember, Sandra Fluke is a woman with no achievements other than being a poster child for taxpayer funded contraception and abortion inducing "healthcare". And if you've forgotten, Bill Clinton is the perfect champion for "women's rights" as the formerly impeached, accused rapist and intern-defiling ex-president.

The Bill Clinton Finger Wag:
How do you know when Bill Clinton is lying? When he wags his finger and gives an impassioned preamble of, "I want you to listen to me", or "listen to me very closely", or some other rehearsed version of the same. You can pretty much bank on whatever is said next will set his perfectly creased and crackling pants on fire.

PICTURED: Men wait in lengthy line for their turn with Sandra Fluke, who is currently in the backstage green room with Clinton. 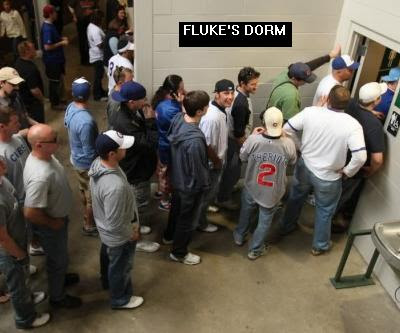 The only question I have for tonight is if Obama will ride a donkey to Charlotte, NC, his chin high in the air as his white, unstained robe flows behind him - as ugly liberal woman lay palm branches in his path to the downsized Time Warner Cable Arena.

Thanks be to Obama! Husseina in the highest!
Posted by DaBlade at 8:08 AM