The Flying Nun was a sitcom that ran for three seasons from 1967 to 1970 and I never missed an episode. You could say I made it a habit (sorry).  Of course the family TV only received 3 channels, two of which could only be watched on good weather days (albeit with extremely fuzzy reception) and only then when the watcher displayed a deft hand on the dial controller for the outside 50 foot antenna attached to the house. 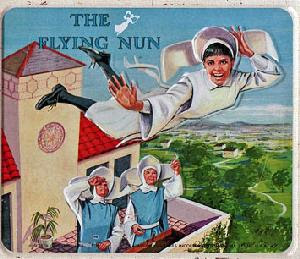 Sally Field had the starring role as Sister Bertrille. I forget what exactly was the premise of this sitcom or the weekly plots...

I'm thinking she was a crime-fighting nun who could fly when pointing her gull-winged cornette into the breeze. Memories of her flying over the countryside is really the only memories I retain from this show, but isn't that enough?


WASHINGTON (Reuters) - The government's "Fort Knox" of weapons-grade uranium storage has ended a contract with a unit of an international security firm two months after an 82-year-old nun and other nuclear activists broke into the site.

My first thought was that Sister Bertrille is 82? I mean, to breach this site would have required nighttime stealthly ninja-like paragliders with superpowers, right? Or the Flying Nun. If only the Israelis had a battalion of these ladies. Game over Iran.

The point is, what this nation needs more than anything during these trying times is a return to this beloved TV series. OK, maybe not running the original series in syndication. What we need is a remake befitting today's unique challenges and fears. The Flying Ninja Nun! Better yet, how about a major motion picture with a budget the size of the Avengers movie.

Heck, maybe 82-year-old Sister Bertrille joins the crime fighting Avengers in their sequel. Can you imagine? You thought Iron Man, Hulk, Thor and Capt'n America were formidable - throw this lady into the mix and fuhgettaboutit!

OK, I actually took a time out to read the article I've already linked to that led to those most excellent ideas above. Apparently I was incorrect in assuming the nun flew over the walls of this "secure" facility.

The nun, Megan Rice, and two others cut perimeter fences to reach the outer wall of a building where enriched uranium was stored.

OK, in this day of islamofacist terrorism, THAT is slightly disturbing. Maybe Sly Stallone as Rambo could pull this off using wire cutters, a bow and a quiver with an unlimited supply of magical arrows, but an 82-year-old SISTA SOLDJA!?

No sense crying over spilt Plutonium. Stitch up the chain link fence, put a new lightbulb in the guard tower lamp and move on. My only hope now is that Sister Megan can learn to fly. And why not? I can see the opening show narration now!

Sister Bertrille, a former anti-nuclear activist who was irradiated by uranium rays during one of her facility security breaches is barely alive! Sisters, we can rebuild her. We have the Holy water and this ridiculous looking winged hat. We have the capability to build the world's first Nuclear Powered Flying Nun! Sister Bertrille will be that nun. Better than she was before. Better, stronger, faster.
Posted by DaBlade at 8:17 AM