Did Gay NBA Player "Walk it Back" (or is this another satirical post to amuse myself)?

The day after NBA player Jason Collins was being hailed for coming out as the first male athlete in professional team sports to publicly announce he's gay now says he was misunderstood. 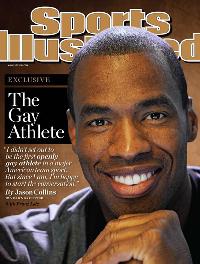 "When I said I was "gay", I only meant that I was happy and carefree," Collins said.

There is a question whether another NBA team will take a chance on Collins, for fear the homosexual 7-feet and 255 pound center would become a distraction in their locker room.

"I'm telling you man, I AM NOT HOMOSEXUAL!," insisted Collins, unsuccessfully trying to walk it back to save the back end of his career. "OK, nevermind. My back end is totalled." "I guess my locker room towel snapping days are over."

It is being reported that the PC NBA will be under pressure to get the "light in the sneakers" Collins under contract, regardless of any talent that is still left in his 36-year-old body.

As CNN's Anderson Cooper queeries, "Can he still pound the rock?"

If we've learned anything since 2008 with Obama's election as the first partially black male with questionable sexual orientation, the American people have proclaimed loud and clear that skill and ability doesn't matter.

Speaking of Obama, he called an emergency press conference in order to preemptively label NBA teams that do not offer Collins a contract as "terrorist organizations". "It's premature to use thaaat 'T' word in relation to those rambunctious Benghazi and Boston bomber students who may have watched a disgusting video insulting the prophet, peace be unto him. But its not premature to label any General Manager as a terrorist if they refuse to pursue Collins. I'm sure they have one of them Christians they can run off their team to make room".

Asked what executive orders he might be contemplating with regards to Collins, Obama stated he would bring him on his staff if necessary. "He could help me with my free throws", joked Obama. "I'll find out first hand if he can still take it hard to the rim!"

Now that the NBA has broken the glass ceiling by allowing a gay player in, do you think the WNBA will follow suit and allow any straight women in?