Earth Day 2013 just so happens to fall on garbage day at DaBlade's house. Like most Monday mornings, I spend it making numerous trips to the curb dragging my refuse. Back and forth, first with my fleet of overflowing garbage cans, then a Giza pyramids worth of 50-gallon black plastic trash bags, and box after box after box chock-filled with other boxes inside them from the prior week's consumption - like so many macabre cardboard cubed Russian nesting dolls destined to fill a Sandra Fluke-sized hole at the local landfill. 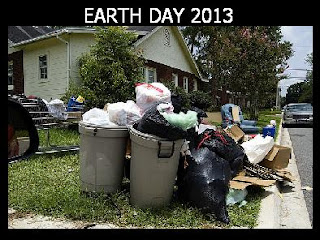 When I'm done, I gaze up and down the block comparing my garbage pile with my neighbors. For some reason I take pride in my winning stack, as if there is some kind of unspoken contest. I win most weeks, even when the neighborhood suffers yet another of the ever increasing obama sheriff's deed foreclosures which results in a curb littered with a worn couch or two, broken end tables, car tires, a broken porcelain toilet, bags of untold debris, and mattresses from once happy bedrooms haphazardly stacked by the roadside like so many other broken lives and dreams.

Before you judge, please be aware that the last trip I make to the curb is to deposit my cute li'l plastic blue recycling bin containing an empty milk carton and a pizza box or two. It makes the wife happy.

Of course, THAT was before I discovered Earth Day exactly 5 years ago.

Don't misunderstand me, my garbage mass could still fill an aircraft carrier most weeks, it's just that now I am burdened by enviro-wacky guilt. This guilt only attacks on Earth Day, as the other 364 days of the year are spent quite literally thinking about other things.  But on Earth Day, my dear dope smoking, pony-tailed and tie die wearing libs, we are brethren.

You see, five years ago I was visited by the spirit of Bob Marley. After we partied with his herb and jammed to that Redemption song, he warned me that for every pound of garbage I threw out during my lifetime I was forging an invisible garbage chain I would be forced to suffer with in the afterlife.

Ah! take heed my friends who still mock Earth Day! You do not know the weight and length of the strong and rancid smelling garbage chain you bear yourself! It was as full and as long as this five Earth Days ago and you have labored on it since. Ah, it is a ponderous and smelly chain!

DISCLAIMER: Garbage is defined as any discarded item thrown out by a capitalist, including but not limited to worn or broken household items, leftover packaging, uneaten non-vegan foodstuffs, or other items resulting from capitalist consumption. Garbage DOES NOT include Earf-friendly items such as dirty drug needles, spent roaches, stacks of discarded and bloodied unwanted fetuses with severed spines, etc., and also the following: Any item purchased with any form of government transfer payment, including but not limited to Social Security, welfare, food stamps, unemployment compensation, etc.

DaBlade! You've made me a believer, but I am one of the few left in this obama economy who still works and earns my own income - so what can I do?

Look to the Algore, our very own flatulating global warming guru, who has taught us that all our environmental sins can be forgiven with carbon credits.

I don't really know, but I think it has something to do with selling your fledgling cable television station to rich oil emirates in petroleum-producing countries to keep yourself well stocked in cheeseburgers and flannel.

But I don't HAVE a fledgling cable network (nor do I really like flannel). What else can I do to be a good Earf friendly progressive?

Do what I do every Earth Day and follow these important steps (after taking out the garbage).

* Get up early and tighten bandana,
* Put on my sandals and walk to the park
* kneel down in pile of leaves
* Cry, wail and mourn the loss of the old growth trees


Return to suburbia, arrogant, self-righteous, and wholly anthropocentrically cleansed for yet another year.

George Carlin on The Environment 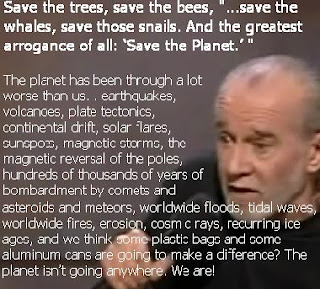