The plan to combat an aphid problem in the Mall of America by releasing 72,000 Ladybugs has backfired.


Though some shoppers have complained that the ladybugs might fly onto food, a mall spokesperson noted that the insects tend to spend their lives on plants, not human food. 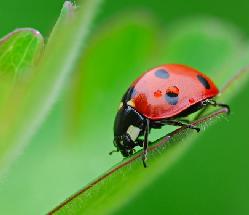 And this mall in Minnesota has "more than 30,000 live plants, including about 400 trees." Hence, the aphid problem.

So far, the ladybugs have left people food alone, but what mall managers did not bank on was the numerous flash bug mobs throughout the day involving these devilish half-sphered spotted beetles.

"It's a concern," stated Clyde The Mall Cop. "On top of everything else in this high stressed security job, nows we gotta worry about a spontaneous song and dance routine from a bunch of feminist bugs!"

One mall shopper shared his frightening encounter, as he sat in the cafeteria at center court.

I was minding my own business and eating a soft hot pretzel. It happened so quickly and seemingly out of nowhere! A single ladybug jumped out from behind a nearby pillar and began to dance. At first it was entertaining, yet pointless. Then another ladybug, who had until then escaped notice by blending in as just another shopper with a shopping bag, joined the first in a hauntingly melodic ladybug duo. Next thing you know, thousands more suddenly appeared - flapping and buzzing around in perfect Coccinellidae Choreography! Some are playing trumpets and miniature little snare drums, others buzzing in harmony as they leaned over a balcony, and still others performed break dancing routines - spinning wildly on their cute little half sphere shelled backs. Then the next thing you know, they just disappeared again and the mall returned to normal. BTW, ladybugs are actually quite tasty when smothered in mustard.

Frank Costanza posited on Seinfeld about roosters, hens and chickens. I wonder what he would ask about the ladybug. In conclusion, I now have another reason not to like shopping. I know I shouldn't be "scarabed", they're just beetles.
Posted by DaBlade at 8:11 AM