Live from the Chattering Teeth Studios, "DaBlade is Right!"

Live from the Chattering Teeth Studios, it's your favorite blog feature game show where I first quote from a story, then I comment on the contents of said quote with a pithy response that will quite literally change the world! Immediately. Seriously. Literally, as in symbolically in my own mind. So COME ON DOWN! you're the next reader on DaBlade is Right!

Police in Nicaragua have detained a former U.S. school teacher who was on the FBI's 10 most-wanted fugitives as a suspect in a child pornography investigation, authorities confirmed Monday.

DaBlade: For consistency's sake, obama should come out with a statement between golf rounds to tell the American people not to judge all child pornographers for this man's heinous crimes by stating, "The future must not belong to those who slander child pornography."

"Toth will be deported immediately because he was in our country illegally," Granera said at a news conference in Managua, the capital.

DaBlade: Do they REALLY plan to round up and deport every child pornographer in their country illegally? Where is the a pathway to citizenship for innocent peace loving child pornographers?  Apparently, Nicaragua needs to "fix and modernize" their immigration system.
Toth taught third grade at Beauvoir, a private elementary school on the grounds of the Washington National Cathedral. He was escorted off campus in June 2008 after another teacher reported finding sexually explicit photographs on a school camera in Toth's possession. He had not been seen since he lost his job.

DaBlade: Why was the teacher rummaging through this guy's camera? Great! Next thing you know, a peace-loving muslim won't be able to walk down the sidewalk without the rightwing gestapo demanding we search the contents of the pressure cooker in his back pack. Is it now against the law for a peace loving muslim to take their sick grandmother some home cooked hot slaw?

The bureau had said that Toth might have been advertising as a tutor or a male nanny and using the alias of David Bussone.
DaBlade: Well "mister dirty child pictures on your camera," you are not getting off that easily! Had you simply dismembered thousands of children after delivering them at birth, the media would completely ignore you. As penance, you will be sentenced to a 3-year term as Scout Master at your local "new and improved" Boy Scout Club. This will have the side benefit of "ushering the organization back to relevancy."

A completely unrelated picture of Obama and his roommate in college. 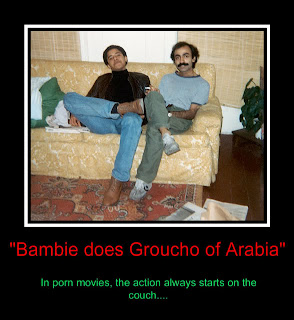