Obama's Christmas Message: "no matter what God you pray to, or if you pray to none at all.”

Awesome. I've said it before, I'll say it again. It is really hard to lampoon this guy. I meant my post from yesterday morning  to be satirical in nature, but even my predictions related to the National Holiday Tree Lighting ceremony last night fell short.

The First Family helped light the National Christmas Tree Friday night, amid a festive celebration of musicians and costumed characters. ("costumed characters"? sounds like the typical democrat convention to me)

President Obama said Christmas is a time “we celebrate the birth of a child who came into the world (without a birth certificate either) with only a stable’s roof to shelter Him.”

He also made this statement about Christmas: “It’s a message both timeless and universal — no matter what God you pray to, or if you pray to none at all.”

Apparently, this message was no off-the-cuff Teleprompter malfunction and is the official tag for this joyous solstice season - as evidenced by this official Obama Family 2013 White House "pop up" Holiday Card 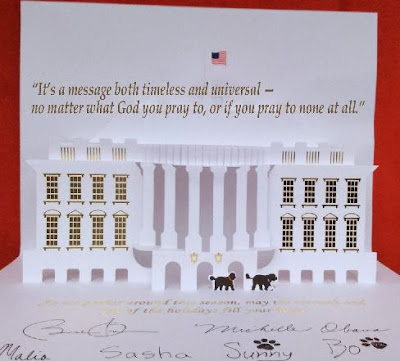 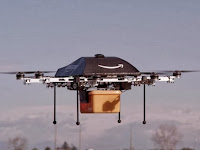 Not sure why the drone is still hovering outside my bedroom window. Huh!