New Years is the time to throw out the old (obama) and bring in the new (Hillary?... new?). There is no time like the present for the media to go "full campaign mode" for their adopted party and to start a little damage control on poor Hillary. It was in that spirit that The New York Times sent their crack reporter, David Kirkpatrick, to Benghazi,and he has returned with an explosive update to that whole scandal. 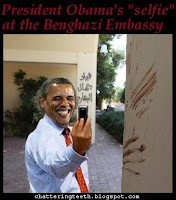 Kirkpatrick claims to have interviewed several dozen Libyan Falafel cart peddlers regarding the September 11, 2012 attack on our consulate that left four Americans dead. Apparently the attack was instigated by an iPhone video made by that Harris boy in that Apple commercial 'Misunderstood - The Harris family holiday'.

When told by a lone dissenter that this report doesn't even come close to lining up with the facts and that the mainstream media doesn't even try to veil their pro-democrat, pro-Hillary campaign commercials as "news" stories anymore, Kirkpatrick is said to have asked, "what difference at this point does it make?"

So in a nutshell: The angle the Times is pushing is that Benghazi really was basically what the White House first dishonestly claimed - a somewhat spontaneous demonstration against a YouTube video that got out of control.


If there is one thing we know now, thanks to the New York Times gutsy call here, is this: David Kirkpatrick has chickpea balls packed in a fluffy pita.
.
If there is just one thing still not completely  clear, however, it is this: Did the Old Gray Lady spoon with Candy Crowley to get this report?

(and if so, will the jaws of life be required?)

And now for a slight rerun, but certainly timely, if you are going to be gathering with family and friends this New Year's Eve. We here at the spacious Chattering Teeth Studios like to gather with a large contingent of the Farkle family and play board games.

The NYT says Al-Qaeda played no roll in Benghazi, but now is YOUR chance to roll... the dice, that is!
Benghazi, by Halfbro is a mix of all your favorite traditional board games, but with a twist. 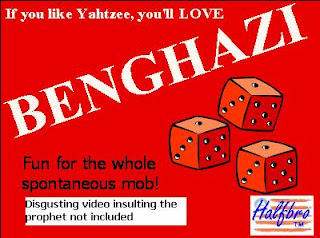 It's like RISK, in that you start by placing your plastic game piece Diplomats on the board and decide whether to support them with security details. It's like Yahtzee, in that you can "roll the dice" on your diplomat's safety if you believe it might hurt your image. It's like Dungeons and Dragons, as a player is picked to be the Candy Mountain Dugeon Master Moderator who decides what monsters attack, and throwing flags at players she doesn't like. It's like Monopoly, only the opposite. Players who collect the most money by following the rules are considered out of touch and must be scorned. At the end of the game, the losers physically remove the money from a player who earned it to win the game.

Object: Score the most points by rolling dice then lying! Hilarious fun for the whole spontaneous mob!

Disclaimer: Disgusting video insulting the prophet not included.
Posted by DaBlade at 7:36 AM