I saw a homeless man at the roadside in Greektown Detroit carrying what appeared to me to be a bucket of his own feces. Intrigued (because I thought I was the only one who liked this in the privacy of my own work shed), I pulled over and parked, thinking to myself that the least I could do this holiday season was make a contribution. 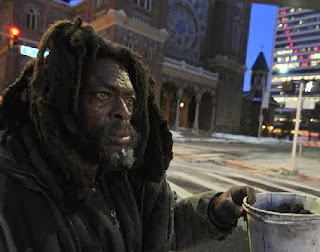 NO, not THAT kind of bucket contribution - though after a lunch of "two up and a chili-cheese fry" at Detroit's famous Lafayette Coney Island, I was sure the contents of my rumbling bowel could warm the gentleman's hands through the coldest winter wind chill.

I was immediately overwhelmed by the nauseating smell of sweat and urine that assaulted my senses, and it was then that I decided to leave the confines of my automobile as I realized that I was the source of these offending aromas. I opened my car door to a brisk and refreshing breeze.

As I approached the gentleman, feet crunching on the broken glass of spent wine bottles, I noticed a soiled cardboard sign propped up beside him that said, "DRUNKS AGAINST DUCK DYNASTY".

Our palaver of verbal confabulation was as follows:

Me: "Good sir! A ha'penny for your thoughts," as I slipped him a crumpled Washington. "What grudge, praytell, do you hold against Duck Dynasty? May I assume you are in accord with A&E and the network's decision to suspend Phil Robertson for what they are calling anti-homosexual remarks?"

Me: I imagine it gets lonely out here and you therefore took offense to Robertson's outrageous claims that a woman's v'yger has more to offer a dude than another man's anus? Any port in the storm, amIright?

Homeless Man: Nope. I am outraged Phil Robertson included drunkards in his diatribe regarding sinners. As a drunkard, I take offense to being included with the homosexuals. I only wish that us drunkards could organize like these peter puffers.

Homeless Man: (he pulls out an obama phone and shows me the screen displaying a news story) See here! As of last night, more than 1 million people have “liked” the “Boycott A&E Until Phil Robertson Is Put Back On Duck Dynasty” Facebook page.

Homeless Man: As of now, there are only four people who have “liked” my "DRUNKS AGAINST DUCK DYNASTY" Facebook page I started. REALLY!? Only four M'F#$%ers? Trust me, since Obama in president, you know, there are a whole lot more drunkards and homeless M'F#$%ers than ever befoe! We needs to organize and insist A&E include the insult to us drunkards as reason for the suspension of that Duck M'F#$%er! You feel me bro?

Just then, a tear rolled halfway down this gentleman's face before it froze solid on his bearded cheek, reminding me of that old commercial featuring the crying Indian who teared up from litter thrown from a car window.

It was then I promised him I would do what I could to get the word out to the rest of the drunkards, starting with my cousin "dr hirkimer" - the drunkard who inspired today's blog. 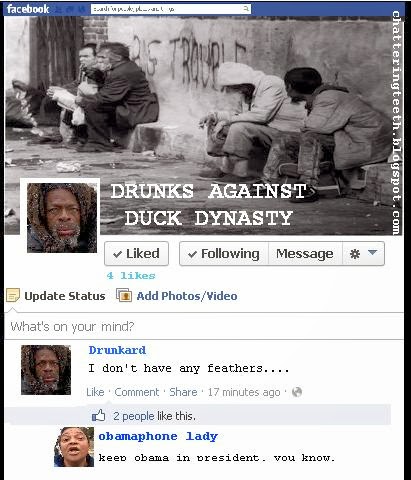 Due to the additional pressure, A&E has tweaked their original statement to be more inclusive to the offended, and to read:

"We are extremely disappointed to have read Phil Robertson's comments in GQ, which are based on his own personal beliefs and are not reflected in the series Duck Dynasty. His personal views in no way reflect those of A&E Networks, who have always been strong supporters and champions of the LGBT community, adulterers, the idolaters, the male prostitutes, the homosexual offenders, the greedy, the drunkards, the slanderers, the swindlers (and any other offended group and segment of the democrat party not mentioned here). The network has placed Phil under hiatus from filming indefinitely."

Meanwhile, Progressives may have shot themselves in their own glittery and light-weight loafers, as most gay activists are also environmental wackos.

BREAKING!!! Phil Robertson has only been suspended for one day, yet nary a duck can be found across the Louisianna wetlands, soaring them to the top of the endangered species list. It seems Mr. Robertson is duck hunting during the time he used to spend on the Dynasty set, and the duck population has plummeted as a result.
Posted by DaBlade at 7:46 AM