Your blog host here at the spacious Chattering Teeth Studios has received some very angry, hateful and downright threatening comments in the past from folks who I assume did not understand my "rare sense of humor" (but enough about my First Grade Teacher, Mrs. Thurman, that was some 45 years ago and I haven't cried about that in days)

But that did get me to thinking. What if an internets traveler stumbled through my blog door (after googling "why does my dentist give me nitrous oxide, and is it normal to wake up without any memory and with chattering teeth? And should I go on a second date with the man?")... and suppose this visitor did not understand my rare sense of humor?

Finally, I have a solution and can once again sleep easy (while sitting naked, hugging my knees and sobbing quietly in the tub as the water from the shower nozzle cascades over me).

So without further ado, I would like to take this opportunity to introduce you to Chattering Teeth's Official Fake Blog Comedy Intrepreter. I met him at a dirt runway in Johannesburg as I was deboarding my homemade hot air balloon while on hiatus to big game hunt - hoping to score the horn from a giant Black Rhino to store my marble collection (I still can't believe I won that eBay bid for the license so cheaply).

Anyways, it looked liked the dude was playing an imaginary game of ping pong, the way he was waving those large paddles around. I was impressed with his assistance in landing my balloon, and we've been pals ever since. It was only just recently that I finally learned this man was a fraud and not actually Alan Keyes.

So imagine my surprise when I saw Alan (I guess I don't know his real name) on TV and signing for the speakers at Nelson Mandela's funeral. I mean, I was happy that he found another gig, despite the fact that I had to kick him off this blog for impersonating a man I hold in high regard.

Listen, I had my differences with the man, but that doesn't mean I appreciate hearing him being called "a fake" for the wrong reason. 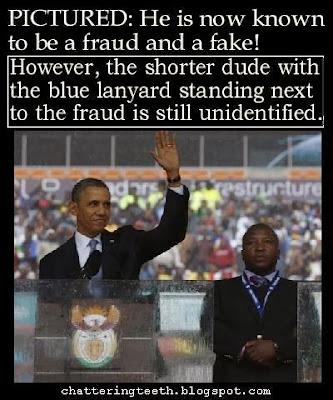 Here is just a couple nasty pull quotes regarding my friend Alan:

"This man himself knows he cannot sign and he had the guts to stand on an international stage and do that..."

Just because you don't understand him, that doesn't give you the right to be so rude! The man CAN sign, it's just that the sign language is one we invented, called "ChatterSign". It is a cross between ASL, Plane Taxi Paddle, Hawaiian Hula, and Barbi Doll Robot.

Send me $19.99 in Bitcoins and I will send you the full transcript from the funeral. I will say that "Alan" did try his best to warn obama about the look on Michelle's face while he was cozying up and taking "selfies" with that blonde PM from Denmark.

p.s. No Black Rhinos, First Grade Teachers, Barbie Dolls, or deaf people were hurt during the making of this blog, and the intent of the blog master is clearly meant to only ridicule progressives in general, obama in particular.
Posted by DaBlade at 6:51 AM