Unfortunately, Obama had assigned the electrical wiring for the National Christmas Tree this year to Joe "Plugs" Biden.

We now enter the Chattering Teeth Blog Time Machine and fast forward to 5PM today, Friday, December 6, 2013, and the lighting of the National Christmas Tree


Cue wavy line thingys to indicate worm hole time travel. We arrive to the ellipse shortly after the National Tree lights were engaged and the crowd performed the obligatory, albeit muffled, mitten clap of applause. 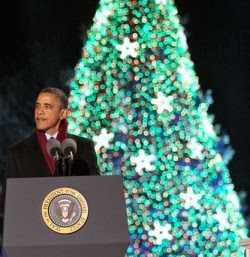 President Obama clutches the sides of the podium, nose and chin thrusting arrogantly upwards as he surveys his flock bundled in swaddling peacoats and Burberry scarves - gathered to see the Tree lighting in his honor and to hear the mellifluous magnificence of his stacatto voice.

The night was very cold due to anthropogenic climate change. Steamy puffs of vapor emanated from the mouths of the media, as they added pollutants to the prestine environment with their every breath while waiting in anxious anticipation for the president to begin - and giving their pathetic lives some meaning for at least this short while in his presence.

The president took a deep breath, looked sideways in a nonchalant attempt to read from his Teleprompter, and began.

OBAMA: My fellow Americans. We once again meet, as we have met with the presidents throughout our racist history, to light the National Holiday Tree. Each year we’ve come together to celebrate a story... thaaaat has endured for two millennia...

*suddenly, the Teleprompter went dark from a loss of power. The tree and everything else still had power, so nobody was the wiser that the president had no... word thingys. The president began to panic, looking from face to face in the crowd.

Unfortunately, Obama had assigned the electrical wiring this year to Joe "Plugs" Biden. 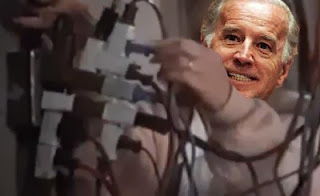 A few female reporters fainted after receiving the gift of the president's gaze, giving Obama cover for this otherwise unexplained pause... "I'm gonna have to wing it," he thought to himself, as the unconscious reporters were dragged away

OBAMA: As I was saying... uhhhh... Each year we’ve come together to celebrate a story... thaaaat has endured for two election cycles. aaaand we have a lot to celebrate this year, what with all the free healthcare and whatnot. Thaaaat said, we should remember those who have given the ultimate sacrifice. Like this tree here. aaaand... Nelson Mandela!

Uhhhh...Let me be clear. Nelson Mandela was a great man who died tragically in a fiery crash before his time, and the Fast & Furious franchise will certainly miss him. 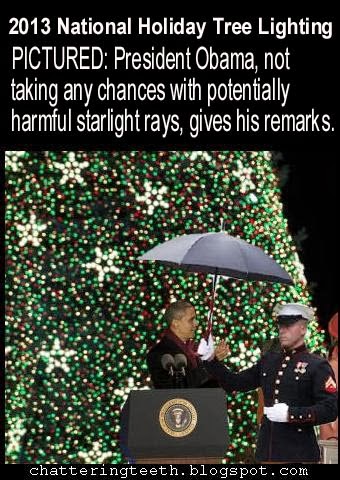 *A marine who was holding the presidential umbrella over Obama's head to protect him from the potential harmful effects of the rays from starlight, leaned over and whispered into Obama's ear: "Nelson Mandela led the fight in South Africa to end Apartheid. And he was 95, and died after a long life well lived."

Obama: What was a 95-year-old man doing driving a Porsche at 200 MPH on city streets? I wondered why Holder never told me that Mandela was involved with my illegal gun running across the border...

And so, this holiday season, let us reaffirm our commitment to each other, as family members, as neighbors, as Americans, regardless of our color or creed or faith.  Let us remember that we are one, and we are a family....

Except for those Republicans in congress who should be embarrassed by their record of not comporting to my will.

Who do they think they are by defying me? Can't we all just get along and be bipartisan by agreeing with my redistribution plans, believing my lies, obeying my laws and granting amnesty to the undocumented immigrants and future democrat voters?

aaand so in conclusion, If I had one wish that I could wish this holiday season, it would be revenge against all my Tea Party enemies, they should die like pigs in Hell! And of course, I wish for all the children of the world to join hands and sing in the spirit of peace and harmony.