The Lowlife, a Novel which dares to tell the true story of the rise and fall of Obama 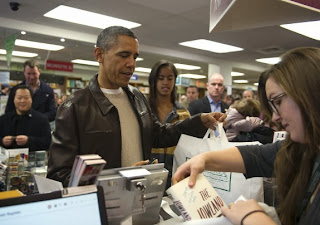 The book in Obama's environment-destroying plastic bag is titled, The Lowland, by Jhumpa Lahiri.
Amazon Book Description:
...set in both India and America... a tale of two brothers bound by tragedy, a fiercely brilliant woman haunted by her past, a country torn by revolution, and a love that lasts long past death.

Born just fifteen months apart, Subhash and Udayan Mitra are inseparable brothers, one often mistaken for the other in the Calcutta neighborhood where they grow up.  But they are also opposites, with gravely different futures ahead.

blah blah blah. Basically, it sounds like one brother goes off to study and teach in America, while the other stays and joins the Mao-inspired Naxalite movement, which demands justice for the poor (whoa. sounds well intentioned, don't it?).

Photo op book store link here
I don't know if this book is being purchased for personally consumption or is meant as a crappy Ramadan gift, or is for his daughter Maluable (Malishes? Malice?) and a school book report. It does have the communist theme throughout, so you know its required reading.

I'm working on my own novel I call "The Lowlife". 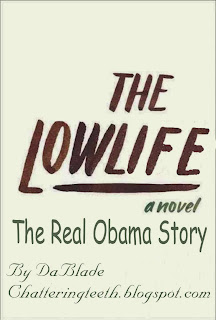 Its about two brothers growing up in Kenya. One stays home to live in a cardboard shack while the other goes to America to become a community organizer, college professor and enters Mao-inspired politics creating a country torn by revolution. I'll let you know how it ends later.