If Obama had a JEOPARDY! champ as his Press Secretary, he would look like Arthur Chu

Meet current JEOPARDY! champ Arthur Chu. Even if you don't watch TV game shows much any more, I bet you've heard of him, right? He has won a lot of money on the show (and is going for more) making him a "have", which is reason enough for liberals to hate on him. But what really has the internets a twitter with venomous comments aimed at this boyish stereotypical Asian nerd with a bowl cut comes from "purists" who despise his strategy. 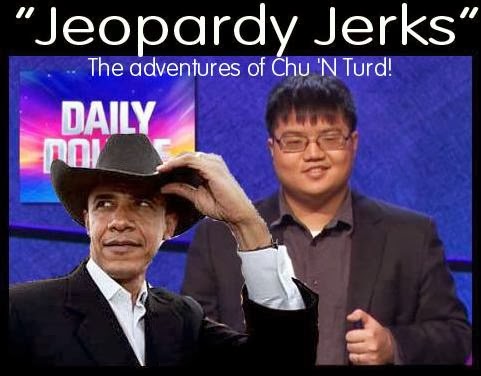 Did someone say 'strategy'? I had no idea strategy came into play with trivia. I always figured that either your brain was filled with this completely useless information or it wasn't. Maybe this is why every Trivial Pursuit game I've ever played has always ended with my little playing piece 5 or 6 wedges short of a full pie.

So you ask, "What is it about Chu's strategy that enrages purists and inspires mass quantities of eHate posts to the point where I imagine they have already filled up a couple Google barges full of government hard drives?"

(1) He jumps around the board a lot, and
(2) His very visible use of the buzzer is irritating.

Whoa! And the so-called United Nations remains silent on this? If a badly made video can cause an otherwise peaceful citizenry to rise up and attack our embassy killing four Americans, certainly this arrogant and erratic waving of the JEOPARDY! buzzer could do much worse. May we at least assume the IRS will be targeting this fellow in order to redistribute his ill-gotten booty?

CHU: *BUZZ* *BUZZ* *BUZZ* "Ill-gotten booty? And the answer is Michelle Obama!"
Pipe down Chu. I'll call on you when its your turn.

Apparently, jumping around the board haphazardly gives Chu a slight edge since his brain gets to fire up the area where "1-LETTER WORDS" are stored (for example) a moment earlier than the other Turd Fergusons.

I HAVE AN IDEA FOR CHU TO REHABILITATE HIS REPUTATION AMONG PROGRESSIVES! OBAMA'S PRESS SECRETARY IN HIS THIRD TERM UNDER MICHELLE LAW! (Marshall Law sounds a little too harsh).

If Chu can interrupt the great Alex Trebek, who really thinks Fox News' Ed Henry would stand a chance? Changing the subject is a refined talent this administration craves, and Chu has it down to an art form. "What about Benghazi?" Wouldn't you rather talk about "Potent Potables?"

Why, with Obama's phone and pen, and Chu's buzzer, they could rule the world! A "Daily Double" indeed.