Sandra Fluke pulls out early and just says no to her Congressional suitors, telling them, "it's not you, it's me."

A Chattering Teeth exclusive! This reporter was given 12 minutes to pump miss Fluke for information, provided I do it on her home turf and in a location she felt most at home. So there we were, in her car's back seat. 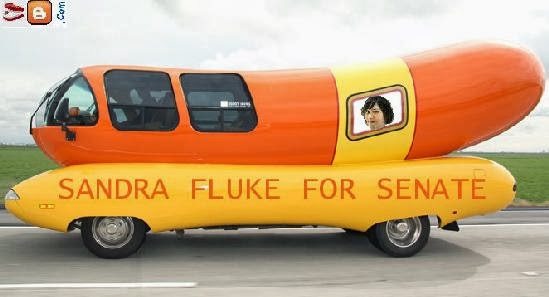 Unfortunately, the first 5 minutes of my allotted time were spent untangling a misunderstanding she had for the special purpose of our meeting this day. When I assured her, "not in a million years, even if she were the only pseudo-female left," and then vomited a little on myself, did she finally understand .

"You're not the first to travel the well worn carpet in my Georgetown dorm room wanting 'just to talk', so let's do this!," said Sandra Fluke.

"So Miss Fluke, first let me just say I am surprised by your choice of automobile. I really envisioned you driving a Volvo, but an actual Weiner Hot Dog Truck?" I looked around the interior of the vehicle, noticing unidentifiable stains and numerous hand and foot prints on the sidewalls, windows and ceiling. There was a pair of fuzzy somethings hanging from her rear view mirror, but they didn't look like dice exactly. There was even the red "take a number" ticket dispenser mounted on the console she said had sentimental value from her college days.

Let's just say I like the ride, but please call me "Sa-Handy", as she bit her lip in a sad attempt to look sexy, initiating another round of my unfortunate and spontaneous projectile vomiting.

Once I was down to occasional dry heaves, I continued.

Miss Fluke, Please tell my readers why you decided against running for retiring Rep. Henry A. Waxman’s congressional seat.

OK, like, I was totally like "Wax" and "seat", and I'm like totally "for sure!," because if there is one thing I need more than anything is a beauty waxing of the whole seat area region down there.

Not to mention some touchup on your upper lip, but I digress. So what you're saying is you originally thought you were signing up for a double buddha-sized 'bikini' wax?

That's right, but then I found out it had something to do with a job inside some Republican controlled frat house, so I aborted that baby immediately.

Instead, you're going to run for the state Senate seat currently held by Ted Lieu, who is running for Waxman’s congressional seat? Why?

Well duh! Mainly because Harry Reid and the rest of my progressive activists are in charge there. I believe that the freaks and peeps of this district deserve to have a fresh perspective from a new generation of progressive leadership in Sacramento, and I am eager to get to work fighting for the causes that matter most to our future as a community, state and nation. Namely, "FREE CONTRACEPTION!" and this means more jobs created and a condom factory on every corner spitting out the prosperity rather than swallowing it... What were we talking about again?

Based on the numerous egg timers and sand-filled hour glasses, our time is about up. I'll give you the last word. What do you have to say to your critics who believe you are nothing more than an ignorant ho enjoying temporary fame from the clueless progressive left because you want to hump-a-lot at taxpayer expense?

Let me just say this. I'm a rubber and you're spew, whatever you spray bounces off me and sticks to you.

Well said Miss Fluke. You just may be the most intelligent Democrat making the most sense in decades. I wish you well in the chamber of the legislative branch.


So in conclusion,  if you live in the greater Sacramento area, keep a look out for Sandra Fluke behind the wheel of her oversized weiner mobile, passing out condoms and STDs to the willing progressive freak show masses.
Posted by DaBlade at 11:39 AM