WasObama Animatronic at Disney's Hall Of Presidents Dismantled by the Reagan Bot?

The Hall of Presidents attraction at Walt Disney World's Magic Kingdom in Orlando, Florida, has been taken over by a large segment of the Animatronic presidential figures this President's Day, 2014. This bloodless coup seemed unprovoked, when suddenly the Ronald Reagan Animatronic slipped the surly bonds of his robotics to "touch the face" of Obamabot. Reagan had the Obama figure in a headlock while the founding fathers pummeled it. When the dust settled and the curtain dropped, all that was left of the Obama robot was a pile of nuts and bolts and a slightly used Obama rodeo mask. 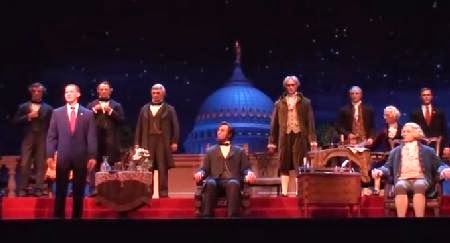 "We were just sitting there enjoying the show," stated one anonymous audience member. "it was nearly over, I know because I've seen this show a million times to listen to the dreamy melifluous speech by President Obama. I know its not really him, but its always been the next best thing. Then Obama starts in with a whole new speech instead of the one he always says. It kind of freaked me out!"

These shocking events were apparently precipitated by the malfunctioning teleprompter 'prop' used for the climatic finish by the Animatronic in the figure of President Obama. Normally the Obamabot is pre-programmed to state the same clap trap his Disney creators with leftist bents have programmed him to say. Instead, it is suspected that someone hacked the programming with a transcript of his new speech containing ACTUAL QUOTES below:

OBAMABOT: I will have the most transparent administration. I have Shovel ready jobs. I do think at a certain point you’ve made enough money. The IRS is not targeting anyone. Benghazi was because of a youtube video. If four Americans get killed... it is not optimal. The future must not belong to those who slander the Prophet of Islam. The sweetest sound I know is the Muslim call to prayer. ObamaCare will be good for America. Whatever we once were, we are no longer a Christian nation. They get bitter, they cling to guns or religion. You can keep your family doctor. Period. Premiums will be lowered by $2500. You can keep your current healthcare plan. No one making less than $250,000 will see their taxes raised one dime.  If I had a son. I am not a dictator. I will put an end to the type of politics that “breeds division, conflict and cynicism. If you’ve got a business — you didn’t build that. Somebody else made that happen. I am not after your guns. The fact that we are here today to debate raising America's debt limit is a sign of leadership failure. (The BO of 2006) That’s irresponsible. It’s unpatriotic.I have been practicing...I bowled a 129. It's like -- it was like Special Olympics. I've got two daughters... I don’t want them punished with a baby. I think when you spread the wealth around, it's good for everybody. The private sector is doing fine. The Public Will Have 5 Days To Look At Every Bill That Lands On My Desk. I will close Gitmo. (my grandmother) she is a typical white person. I am not spying on American citizens. Islam is a religion of peace and tolerance... I am absolutely certain that generations from now, we will be able to look back and tell our children that this was the moment when we began to provide care for the sick and good jobs to the jobless; this was the moment when the rise of the oceans began to slow and our planet began to heal; this was the moment when we ended a war and...

The audience was quietly sobbing. It was at this point in the presentation when the Ronald Reagan Animatronic thankfully intervened.

REAGAN: Well, I've had just about enough of that, how about you?

The Reaganbot now leads in all polls.
Posted by DaBlade at 7:56 AM