"My Brother's Keeper" and other liberal progressive schemes

A Chattering Teeth Cliff Notes translation of President Barack Obama's comments at a White House event to announce the "My Brother's Keeper" initiative. 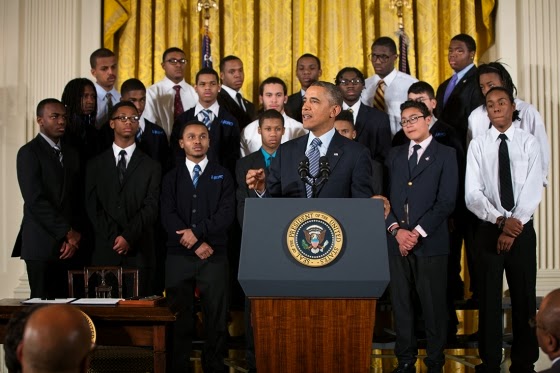 Good afternoon my N-words. And thank you for that outstanding introduction.

Let me be clear. I am here to continue my campaign of dividing Americans as a means of distraction while I fundamentally change this country into a socialist utopia... like Cuba. Like a magician using misdirection and sleight of hand, I can draw attention to a raised coin in my right hand while my left is busy shredding the Constitution by robo-signing un-American executive orders.

But that's not what I'm here to talk about. Today, I'd like to concentrate on the most important issue of our time. No, not the economy which is clearly in ruins. Not continued rampant unemployment. Not the disaster that is Obamacare. Not the austerious $17 Trillion national debt. Nor do I want to talk about the state of the world which is on the verge of exploding.

Speaking of which, did you catch that North Korea just fired four short-range missiles, only to have them fall harmlessly into the sea? Seriously Kim Jong, that was as impressive as a Dennis Rodman free throw bro. AIIIIR BAAAALLL!

No, today the most important issue of our time is... skin pigmentation. Running a close second is a tie between where homosexuals put their naughty parts, the right for women to murder their own children, free contraception (paid for by those unwilling Christians), an artificial minimum wage that hurts those I purport to help, amnesty for illegals so they can vote me in for a third term... well, you get the idea.

But skin pigmentation trumps them all. Today we celebrate all of the various skin tones that are represented behind me, from the Cracka-like beige, to a little less cream in the coffee, to the cinnamons and the mochas, to the really dark "John Boehner-like" skin tones. Really, all of the skin tones behind me are to be rewarded. Since I get to pick the winners and losers, there will be no actual Crackers, Toe-headed blue eyes with European descent, no reds of the American Indians. No yellows of the Asian persuasions.

It gives me great joy to announce some program called "My Brother's Keeper" initiative. If you're like me, you have a half-brother living in a cardboard shack in Nairobi and hooked on smack. The least we can do is redistribute income from folks with lighter skin pigmentation so the bruthas can play some midnight basketball.

Thank you. May the same God bless you who "blesses" Planned Parenthood. And God bless the Un-United States of America.