This WAS NOT Dallas news anchor's reaction to the Democrats.

But if it were, would it go viral? 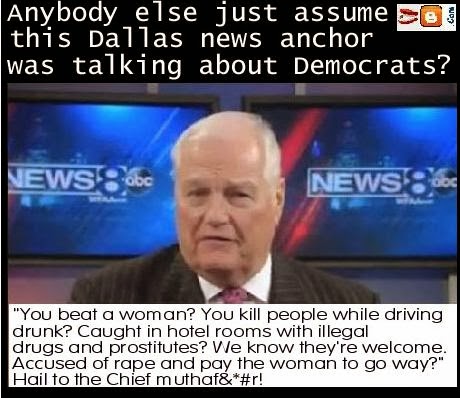 DISCLAIMER: I may have slightly edited text of this jacka$$es original statement...

"You beat a woman and grab her by the neck and shake her? (Congressman Charlie Wilson D-OH), Welcome to the Democrat Party! You kill people while driving drunk? (the Late Senator Edward M. Kennedy D-MA) That guy's welcome, based on his reelection 7 times... (Politicians) caught in hotel rooms with illegal drugs and prostitutes? (Former Democrat D.C. Mayor Marion Barry or any one of several hundred more) We know they're welcome. Players accused of rape and pay the woman to go away? (Can you say former Democrat president and raper-in-chief Bill Clinton?) You lie to police, trying to cover up a murder? (and his wife, Hillary) We're comfortable with that. You love the Constitution? Well, now you've gone too far you Tea Drinker!"
Posted by DaBlade at 7:27 AM