OBAMA: "If I had a son, I'd want his scoutmaster to be a gay pedophile."

Nice work Disney. Walt would roll over in his grave if it weren't for the fact this would make his decomposing bum vulnerable. 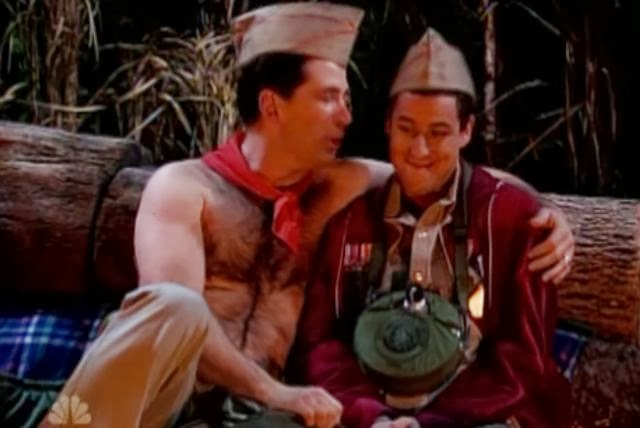 Progressives are trying to destroy everything that used to be wholesome and pure. Instead of infecting the Boy Scouts, why don't you start your own club? You could call it the Rump Rangers (or whatever you'd like). Leave the Boy Scouts alone in their mission to develop boys into healthy young men. Instead of hiking, camping, shooting a bow and arrow, or any other healthy outdoor activity, your club could instead concentrate on costume designing and/or other dressup games, makeup wars, synchronized yoga or whatever else floats your canoes. Just don't call it Boy Scouts... and get a gay baker to make your f*^ing cakes, OK?

What are you, DaBlade, some kinda homophobe? You don't believe in equal rights for gays? What do you have against the gay community anyway?

I love the homotesticles, I just hate their sin. I would love no less a neighbor suffering from a brain disorder that predisposed him to violent behavior, but that doesn't mean I am discriminatory in not wanting head injury guy to be by little lad's kindergarten teacher. I would hope that brain injury guy sought and received the medical treatment he needs and deserves.

There you go comparing loving homosexuals with a brain tumor! Just shows how much you know! It might surprise you to learn how many of your fellow neighbors are homosexual that you never suspected! You can't always judge a book by its cover DaBlade!

Well then, If I don't SUSPECT them, then that means THEY'RE DOING IT RIGHT! I am quite sure there have been many gay scout leaders  since its founding in 1910. If they kept their private sexuality to themselves, then nobody got hurt.

It is for the same reason I was against the repeal of DADT and allowing this so-called "serving openly" caveat.


The purpose of the military is to kill our nation's enemies and to blow sh*&  up, and I just feel that this activity is "asexual" in nature. I would think that any public displays of affection between a man and a woman gets in the way of this mission.

It is for the same reason I am against any scoutmaster "serving openly" by displaying their sexuality. I would also not want a happily married, Christian  heterosexual scoutmaster who insisted on conjugal visits from his misses while out on safari, OK?

If I send my child into the woods with you, I don't want a sign on your f^*%ing tent that says "If the tent is rockin', don't bother knockin'!" Doesn't matter who (or what) you have in there with you. **BAAAA** **BAAA*** and that goes for the goat too.
Posted by DaBlade at 7:22 AM