President Obama wraps up his visit with Japan, leaving for South Korea later today in the next leg of his Asia tour. Let's see if you were paying attention while he was in Japan.

2  Obama was caught bowing again, this time to a (BLANK)
a) half eaten plate of sushi
b) 90 degree sand wedge
c) bowl of noodles
d) male Japanese Robot

3  Obama was criticized for not being able to finish his (BLANK)
a) male Japanese Robot
b) wife, The First Lady, Michelle Obama
c) golf round
d) half eaten plate of sushi

But I would like to dispute ONE of these... 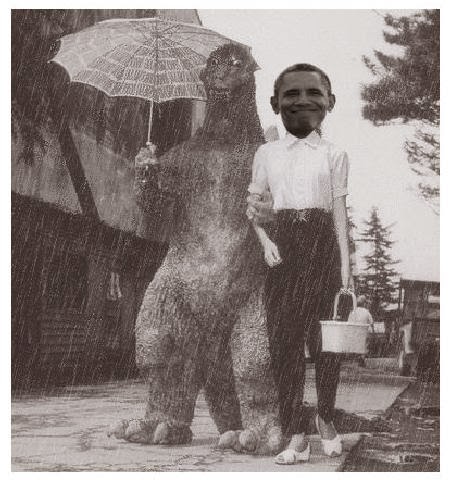 I'm just happy that Michelle was able to join her husband (the one in the sensible shoes) in Tokyo before the president departs for South Korea later today. This should FINALLY put to rest the rumors of divorce, as well as indescriminate rampages through the Japanese capital, toppling buildings and breathing fire at fleeing taxis.


**whispering urgently** Psssst! Mr. President... That is not the First Lady! Please quietly extricate yourself from the scaly creature and move away slowly... DO NOT RUN!

OBAMA: Uhhhh... What are you talking about? Not Michelle? Why I'd recognize her anthropomorphic torso, muscular arms, furrowed brow and hot breath anywhere! Oh sure, the spikes along the back and tail are new, but who's to say that's not an improvement?

BONUS QUESTION:  Who picks up a bus and throws it back down
As (they) wade through the buildings toward the center of town?