I thought Ebola is supposed to be hard to get? Isn't that what obama has been telling us he continues to leave our borders wide open and travel unrestricted?

In fact, I believe the obama administration said in order to get Ebola, you had to take a nude jacuzzi and steam bath, and indiscriminately swap bodily fluids... No, wait! That's his campaign fundraising strategy. I always confuse those two.

So if its so hard to get, how did this health worker become infected? I assume she was wearing the prescribed protective clothing, gloves and mask. As far as we know, she was only in proximity to ONE Ebola patient, so its not exactly a numbers game. Those who have been warning of potential catastrophic loss of life have been labeled 'fear mongers', and the obama apologists have been out in full force. It's no longer a question of "if" with these bozos in charge. It is now just a question of "how much longer do we have".

That's the memo, and now for the news:

The President of the World, Barack Hussein Obama, recently assured West African countries that “You cannot get it through casual contact like sitting next to someone one a bus."  Of course, this message was delivered via a video message thousands of miles away 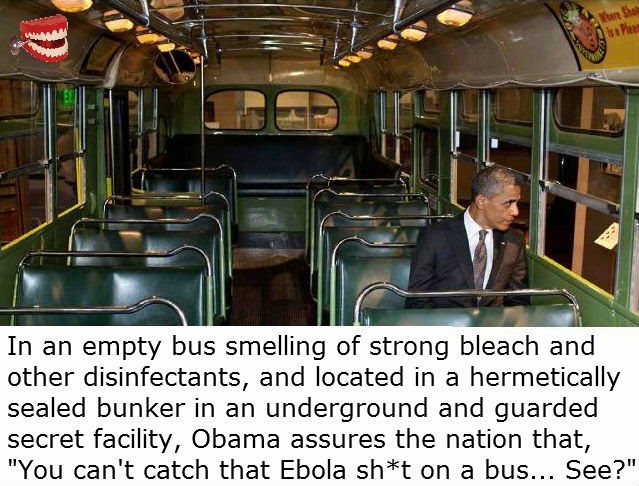 In an empty bus smelling of strong bleach and other disinfectants, and located in a hermetically sealed bunker in an underground and guarded secret facility, Obama assures the nation that, "You can't catch that Ebola sh*t on a bus... See?" 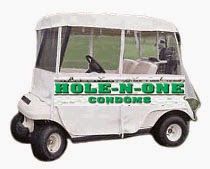 Proof that Obama is taking the Ebola outbreak crisis seriously, he has been spotted golfing from a sheathed golf cart.


The latest Gallup poll reflects Obama's approval numbers have sunk to a new low of 39%. Meanwhile, the deadly virus Ebola enjoys a slightly better approval rating, with 57% respondents picking 'Ebola' over 'Obama' to the question: With whom would you rather have dinner? 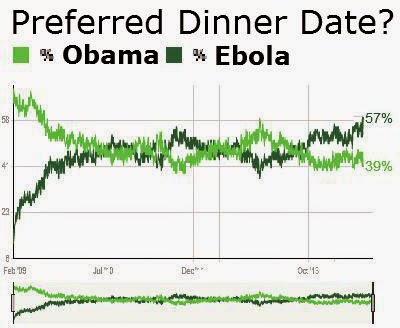 Officials soothe progressive fears by promising that the new airport Ebola screening process will not engage in viral profiling. "We will absolutely NOT target those individuals flying in from West African countries who are exhibiting signs of hemorrhagic fever, have festering boils and oozing pustules or otherwise bleeding from their eyes, ears, nose and rectum," promised WH Sect boy, Josh Earnest.  "Besides, we have these really cool non-contact thermometer iPhone apps that are accurate within 20 or 30 degrees!"

You say Obama and I say Ebola
You like tomato and I like tomahto
Obama, Ebola, Tomato, tomahto.
Let's call the whole thing off
Posted by DaBlade at 9:02 AM