First, there was the “despicable” decision by Goddard College in Plainfield, Vermont in choosing convicted cop killer Mumia Abu-Jama to give the commencement address.

The victim's widow is not very happy about this, stating "It’s not appropriate. His freedom was taken away when he murdered a police officer in the line of duty. It seems like our justice system allows murderers to continue to have a voice over the public airwaves and at college commencement. It’s despicable.”

Obviously, "the victim's widow" is upset, so we will give her a pass on all of those insensitive racist remarks of hers. Nothing that a few visits from the Black Panther Party couldn't cure.

Bowing to public pressure, Godless College in PlainTown, USA canceled the original plans to use cop killer Mumia Abu-Jama to give the commencement address, and instead have gone with the Ebola Virus as a less controversial choice. 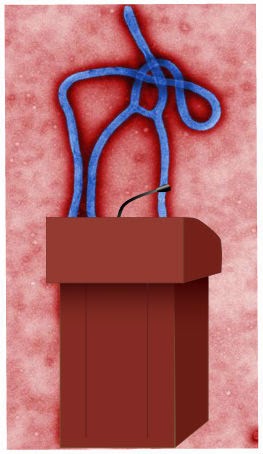 
"Choosing the Ebola Virus as their commencement speaker, to me, shows how this newest group of Godless graduates expresses their freedom to engage and think radically and critically in a world that often sets up barriers to do just that."

"Hey, we originally wanted that Oklahoma Muslim be-header fella but figured some other university has probably already snatched him up, either as a commencement speaker or offered him a professorship."

The event will mark the first time the Ebola Virus will give a college commencement speech. However, thanks to obama's open borders, and now that he is here in the US for good, The Ebola Virus promises to start making his rounds immediately.

The commencement address drew a few fringe protesters in hazmat suits. They were immediately jailed for making judgemental and "viralist" remarks.
Posted by DaBlade at 7:27 AM