Donald J Trump is no John F Kennedy, but he did suffer his own version of a Cuban Missile Crisis at the GOP debate last night in Texas. Trump is also no Reagan, but Trump's unmoving hair mass seemed to be some kind of Star Wars Defense shield, deflecting wave after wave of Truth shells lobbed by both Marco Rubio and Ted Cruz. 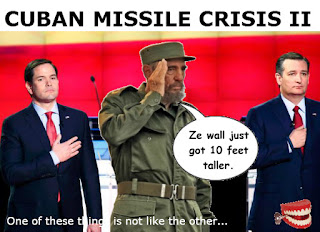 Houston, we absolutely have a problem. That big slice of spoiled ham in that Cuban Sandwich last night must be bathed in so much preservative, no amount of truth seems able to decompose and expose it for the 70-year-old pile of fraud garbage that it is.

Nothing seems to be able to stop the Trump Chump Train, but I was very impressed with Marco for at least pointing his missiles in the right direction for once, though it might now be too late. Make no mistake, Trump was a disaster and had cartoon-like responses. But I thought the same thing at the last debate and it didn't seem to affect his supporters.

Ben Carson: "A movie was made about these hands..."

Shut up, Ben! Seriously, what are you still doing here? Not that I am not impressed with your neurosurgical past (and the fact you were able to find the debate stage tonight under your own power this time.) But those hnads of yours now make fruit salad, or something.

George HW Bush showed more "energy" at the debate last night from his box seat. I don't know if that was a smile or a grimace on 41's face, but THAT was the EXACT same look I had when Trump was blathering.

That's all the time I have this morning. (lucky you). BTW, is there a bigger jerk on TV than Geraldo Rivera? What a piece of ...(blog edit)
TO BE CONTINUED...
Posted by DaBlade at 8:22 AM