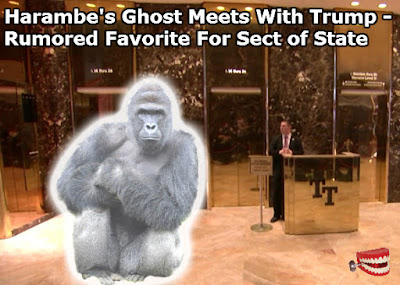 New Jersey Gov. Chris Christie and former New York mayor Rudy Giuliani are said to be out - Harambe's ghost likely has the inside track for secretary of state, at least according to this oft-used super secret Chattering Teeth blog informant who wishes to remain anonymous (or maybe he said he wished to remain "inebriated"?) 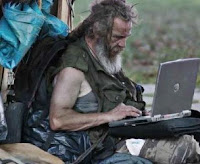 In any case, after interrogating my source in the alley adjacent to Trump's downtown Manhattan skyscraper (and polishing off his last bottle of Ripple), we witnessed what appeared to be a large, white and glowing gorilla climbing the outside of the Trump Tower. It was obvious to us that we were watching the ghost of Harambe trying to meet clandestinely with Mr Trump regarding a potential cabinet pick. Why Harambe chose to exit the meeting via the elevator banks a few hours later remains a mystery.
Posted by DaBlade at 9:07 AM