Chattering Teeth News - Colleges are more and more providing "safe spaces" where students can hide away from scary ideas they are indoctrinated to disagree with, but did you know they are starving?

More than half of students at U.S. community colleges say they're hungry


Honestly, I had never heard the term "Food insecurity" until this article, but now I plan on tirelessly dedicating the remainder of my entire life (if not the next 5 minutes spent formulating this post) to stamping out this scourge from our college campi! Most of these kids may graduate with a 4-year degree owing tens of thousands, even hundreds of thousands of dollars in student loan debt - so the least we can do as a compassionate society is to make sure they never have to pay for food (or contraceptives... or medical marijuana). 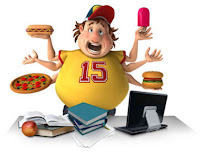 Just look how far we've fallen in just 5 years, when in  2011, USA Today reported an "obesity epidemic on college campuses," and the dreaded Freshman 15 with rampant student weight gain caused by "unhealthy eating, sleeping habits and lack of exercise." In fact, the percent of overweight and obese American college students increased from 27.4 percent in 2006 to 29.2 percent in 2011, according to the American College Health Association.

THEN THE UNTHINKABLE OCCURRED IN JANUARY, 2015

Ramen noodle truck crashes on on North Carolina highway scattering the packets of noodles along the highway and eventually ending up in a local landfill. 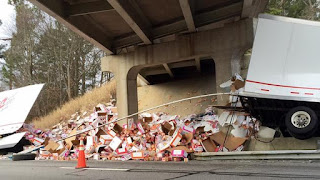 For less than 15 cents per day for the average cost of a noodle packet, your generous gift of $150 will feed a millennial college student three square meals a day for an entire year.

To give, simply send a money order or cash to:

Sarah McLachlan? Take it away...

In the arms of the angel
fly away from here
from this dark cold dorm room
...may you find some safe space comfort here
Posted by DaBlade at 9:09 AM