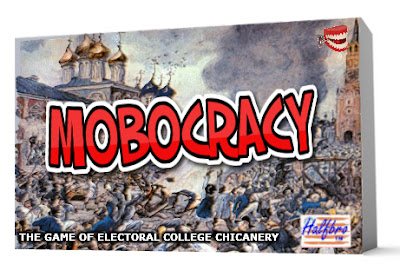 Mobocracy, the exciting new board game that takes up where Landslide (1971) and the general election left off. You are now officially the Republican president-elect of the United States - having earned 306 electoral college votes out of the total 538 votes possible - despite losing the irrelevant so-called popular vote due to the hordes of leftists and marxists who haunt both coasts. They do not like losing, and have never let the constitution or the rule of law stand in their way before. "The majority will of the American people must be heard," they claim, ignoring the fact that 50 individual state majorities have spoken. So Watch out flyover country, and deal me in!

OBJECT: Mobocracy is the only game where you start out a winner. The object of the game is to navigate your game piece around the gameboard successfully dodging, nullifying or otherwise "trumping" all obstacles thrown in your way. Come out the other end with at least 270 electoral college votes and you are declared "still the winner."

HOW TO PLAY: First, choose your game piece. 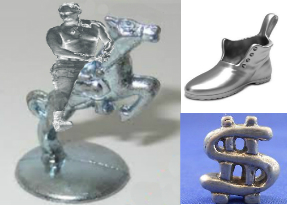 You can either be the shirtless Putin on horseback, Hillary's orthopedic shoe with cankle support, or a dollar sign that promises future prosperity after 8 years under a tyrannical and destructive obama regime.

If you land on a space labeled MEDIA, you must draw a card from the top of the media deck and follow its direction. Each media card will tell you what all players must consider important for that turn (1 turn = 1 week) and then will tell you what you are supposed to think about it. Whether the card is about "Syria", "tax returns", "Transgendered Bathrooms" or "foreign hacking", each media card is nefariously designed to thwart the Republican president-elect and turn public opinion against  him. Once the media card is drawn and read, you may set it aside and ignore it completely, as traditional state-controlled media no longer has any power they have historically wielded in support of their party.

If you land on a space labeled CELEBRITY APPEAL, you must draw a card from the top of that deck and read out loud without cracking a smile. You may draw the card for actor Martin Sheen. 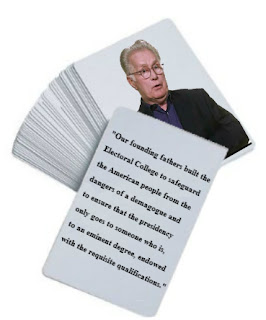 If you cracked a smile, you must draw another card and try again. Don't worry if you draw a "Debra Messing" or a "Bob Odenkrik" or some other celebrity you have never heard of before. Don't you want "their respect?"

All CELEBRITY APPEAL and MEDIA cards are trumped with a 2AM TWEET wildcard:

"Obama is the very definition of unqualified demagogue, this I will tell you."

By the way, you have an unlimited supply of 2AM TWEET cards.

If you land on a space occupied by a Trump Elevator, you may move your marker up to the allotted gameboard floor! If, however, you land on the likeness of Governor Chris Christie or Mitt Romney, you take the chute all the way back to the start - just like Chutes and ladders! 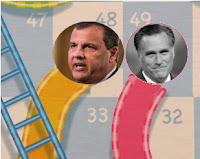 Get to the end of this bizarre progressive gauntlet and you win (again!)

Get your copy of MOBOCRACY today! By Halfbro!
Posted by DaBlade at 10:14 AM