Trump has always operated under the promise of “You hit me, I hit you back twice as hard," so when China had a hissy fit over a phone call he accepted from Taiwan President Tsai Ing-wen, you knew Trump would respond in some fashion.

UPDATE: CHATTERING TEETH NEWS HAS SECURED AN EXCLUSIVE PARTIAL TRANSCRIPT OF THIS CALL!
(the emergency hotline rings in the presidential palace in Beijing. President Xi Jinping picks up...)

TRUMP: Yes, is this Cheeiyna One? I would like a bowl of Wonton soup, a full order of Sweet and Sour chicken, and an egg roll or three. Oh, and throw in a handful of them Chinese cookies with the cute little fortunes and lucky numbers.

TRUMP: Genewal? Oh, you mean "General." Good idea. Throw in a batch of that General Tso's chicken! I'll have my boy, Priebus pick it up in , say half an hour?

Trump is now threatening to build a great wall around "Cheeiyna" if they don't knock it off. 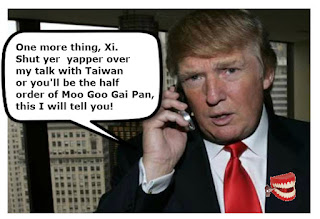