Santa sat in his recliner drinking eggnog after having watched the speech from Fed chair Janet Yellen. "She kinda looks like Mrs. Claus, doesn't she fellas?," Santa asked the elves. 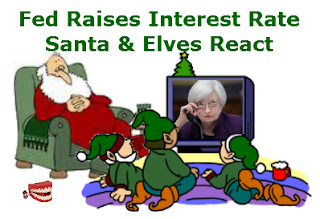 "Hey Santa, what does this quarter point rate hike and the promise of three more next year mean for our business," asked the head elf in response. "Is it really in response to a strengthening U.S. economy and expectations of higher inflation, or simply a signal that the Fed no longer feels the need to prop up a flailing Obama economy?"

All the elf eyes landed on Santa, nervously awaiting his response. Santa took another chug of his spiked 'nog and dribbled a healthy portion onto his beard. The elves leaned forward and studied Santa's every facial movement and nuance, hoping to pick up clues as to what this hike would mean.

Santa stared back through bloodshot eyes, and wiped his mouth and beard with the swipe of the back of his hand. He then expelled a gargantuan belch...

Santa's tepid reaction suggests that he may have priced in the likelihood of this rate hike to put the brakes back on the economy before too many children started chasing too few toys leading to rising prices and inflation.
Posted by DaBlade at 7:41 AM