Florida man disappears into the earth, along with his entire bedroom from a gigantic sinkhole after his online posts calling the coronavirus protests 'Bulls---' and 'Political Ploy' 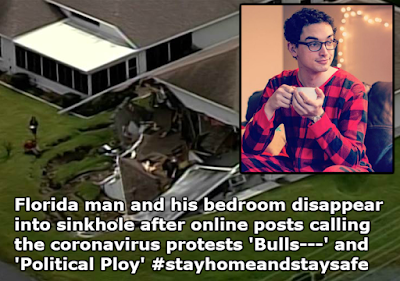 Chattering Teeth Fake News - A Florida man is sucked into a huge sinkhole that formed under his bedroom where he sequestered himself for the past two months while posting to his social media accounts trying to shame patriots who protested against the lockdown claiming the protests were "Bulls---" and a "Political Ploy," according to reports.

Hugh G. Dildeaux 30, lived in his mother's home in Florida, wore feety pajamas all day during the quarantine and is said to have dozens of Instagram followers and Facebook friends.

He had made several posts about those protesting the lockdowns during the coronavirus outbreak on Facebook last month before eventually being swallowed by the Earth on Earth Day, 2020. Cause of death will be listed as from the coronavirus, even though his pre-existing condition as that of a socialist would have killed him.

“Does Anybody Have the Guts to Say These COVID-19 Protests Are a Political Ploy? Asking for a Friend. Prove Me Wrong,” he wrote on his InstaPage account.

"We have to shelter-in-place and 'Crush that curve' in order to be safe. Why should I care if they lost their business they spent their entire lives building, or why should I feel sorry for those who lost their jobs and can't feed their families?"

"Mom! Bring me another sandwich and some hot cocoa!"

Disclaimer: This story has nothing to do with this actual hit job 'news' story
[Ohio man dies from coronavirus after online posts calling it 'Bulls---' and 'Political Ploy']
that leftists have been 'joyfully' and erroneously using as a self-righteous example of why these draconian shelter-in-place orders are necessary, and where they exhibit apparent glee at the death of this man and the suffering of his family in order to try and make a political point - which also fails any logic test - but these are leftists, so...

IN OTHER NEWS:  Today is Earth Day. 1970 was the first Earth Day, so this is the 50th anniversary of the first time we only had 20 years to live.
[Click here for DaBlade's Fun Earth Day facts!]